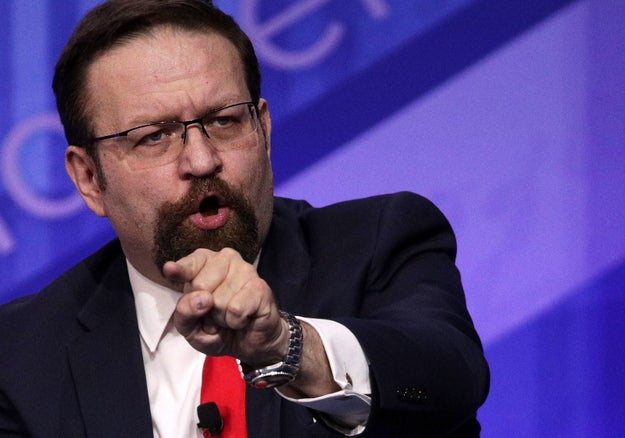 Sebastian Gorka, a top national security adviser to President Trump, stonewalled when BuzzFeed News asked about a report that he belongs to a Nazi-allied group.

On Thursday, The Forward reported that Gorka is a member of Vitézi Rend, a Hungarian group that the US State Department says was “under the direction of the Nazi Government of Germany.”

The report also claims that if Gorka – who was born in the UK, lived in Hungary, ​and became a US citizen in 2012​ — did not disclose this information when entering the country, ​the omission of this information ​would have implications for his immigration status.

“The State Department’s Foreign Affairs Manual specifies that members of the Vitézi Rend 'are presumed to be inadmissible' to the country under the Immigration and Nationality Act,'” The Forward reported.

The leaders of Vitézi Rend said that Gorka took “a lifelong oath of loyalty to their group.”

Captain Gyula Soltész, a current leader in the Historical Vitézi Rend, confirmed to BuzzFeed News that Gorka is a current member. Gorka reportedly belongs to this “reconstitution of the original group on the State Department list, which was banned in Hungary until the fall of Communism in 1989,” accoring to The Forward. There are currently two groups in Hungary that claim to be the legitimate heirs of the original Vitézi Rend, and Gorka, according to the group's leader, was a member of the “Historical Vitézi Rend.”

Steven Goldstein, executive director of the Anne Frank Center for Mutual Respect, an independent US organization, linked Gorka’s non-denial of connections to the Vitézi Rend to what Goldstein calls the White House’s “weak reactions” to the recent spike in antisemitic hate crimes.

“This administration has staff with shockingly anti-Semitic pasts and it is hard to imagine that they have nothing to do with the horrifically weak reactions to anti-Semitic hate crimes that we see coming from this administration,” Goldstein said. “That Sebastian Gorka cannot even deny that he has links with a Nazi-affiliated group is symptomatic of the grotesque anti-Semitism that has infected the Trump White House.”

Corey Saylor the director, of the department to monitor and combat islamophobia at the Council on American-Islamic Relations said, “The White House should show its commitment to fighting all forms of discrimination, in this case anti-Semitism in particular, by severing ties with Gorka.”

In television interviews with Gorka during one of President Trump's inaugurations balls, the future White House advisor could be seen wearing a traditional Hungarian “bocskai” jacket along with two medals. According to a Talking Points Memo report on the clothes and medals worn that night, wrote that “some Hungarians who came across the interview interpreted the getup as a nod to the knightly order of merit Horthy founded in 1920, the Order of Vitéz.”

Horthy is in reference to Admiral Miklos Horthy, founder of the Vitézi Rend and the ruler of Hungary for over 20 years. While the article points out that not all Hungarian scholars agree that the medals “could definitively be identified with Horthy’s Order of Vitéz,” they did agree that “Gorka's regalia is popular today among Hungary's nationalist conservatives.”