The United States is a great big country, and a whole bunch of it is filled with great big houses. They’re called McMansions, and since 2016, the foremost chronicler of those houses has been the blog McMansion Hell. 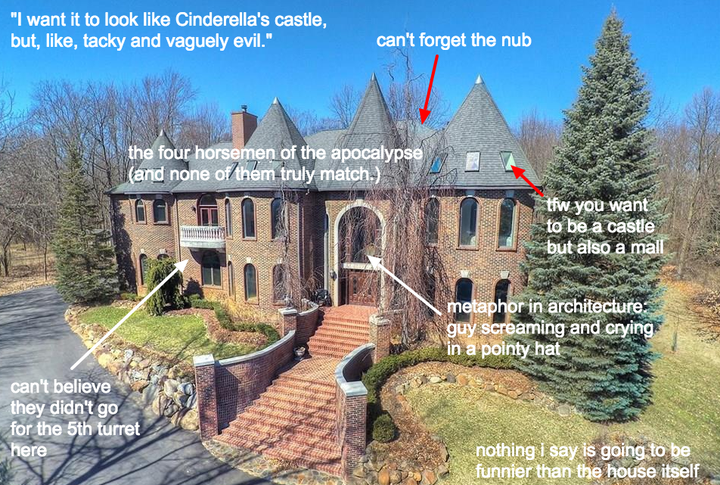 Kate Wagner, a 23-year-old writer and grad student, runs the blog, which used the tagline “if you love to hate the ugly houses that became ubiquitous before (and after) the bubble burst you’ve come to the right place.” 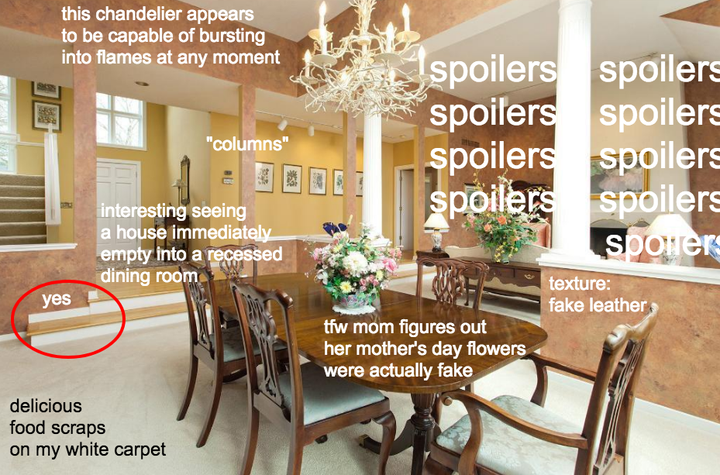 McMansion Hell grew in popularity in recent months by mixing sarcasm, internet lingo, and erudition in commentary superimposed on real estate listing photos. It has a whole section of homes that are “Certified Dank™” — the best of the absolute worst.

The blog has been featured in a variety of publications including Business Insider, The Independent, and the Huffington Post.

But on Monday, Zillow, the biggest and most influential real estate website on the internet, sent Wagner a cease and desist order, leaving the future of her site as imperiled as the value of a 5,000 square foot home outside Las Vegas in 2008. 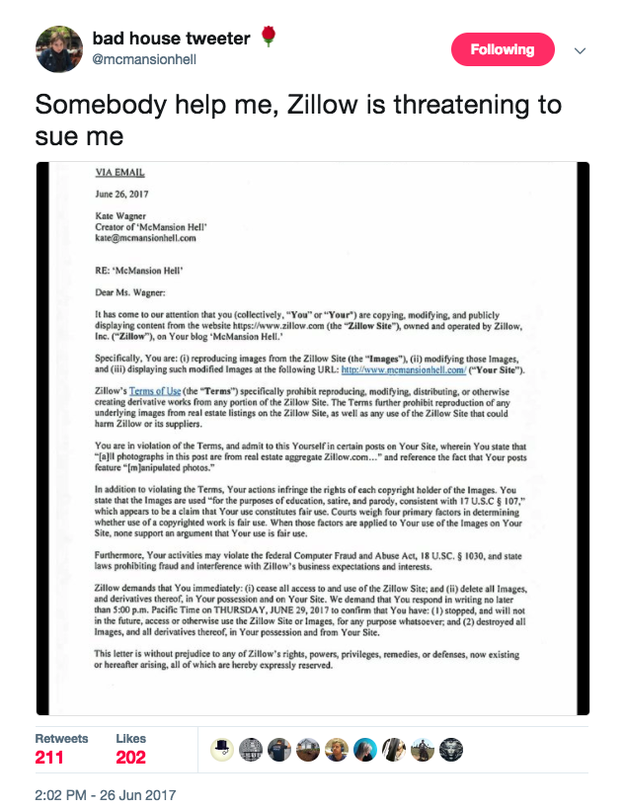 Wagner posted a screenshot of Zillow's cease and desist letter Monday afternoon on Twitter. In it, Zillow accused Wagner of reproducing images from its website, and said that she was infringing on the “rights of the copyright holder of the images.”

It concluded with a demand that she immediately stop using images from Zillow and delete all that she had obtained from the site.

Zillow spokesperson Emily Heffter told BuzzFeed News that the company has “particular rights about how other people use photos” posted on the site. Zillow receives images from hundreds of providers across the US, but one consistency in its agreements with those providers, Heffter said, is that “we can’t let other people use them.”

“We have to enforce that,” Heffter said. “It's just our responsibility.”

The cease and desist letter was not a response to the type of content or commentary that Wagner was offering, she said.

Zillow sent the letter the same day the Washington Post published a story on the return of McMansions in which Wagner offered commentary as an expert on the topic. 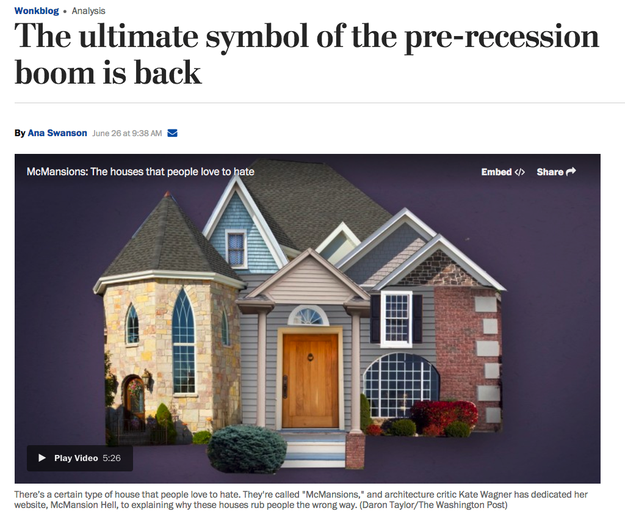 By Monday afternoon, McMansion Hell had been taken down.

Wagner did not respond to BuzzFeed News requests for comment, but she tweeted that she was “going off line for a while” and that “this blog is my entire livelihood, if it goes, I lose absolutely everything.”

She later tweeted that the “url is down temporarily do not be alarmed,” and said she was seeking legal counsel.

Heffter said that Zillow never ordered Wagner to take down the entire blog and that “it's unfortunate she did.”

Wagner added McMansion Hell has not been deleted and that “I'll be back on Saturday.”

Fans were dismayed by the disappearance of the site, which in addition to epic McMansion take downs also included lengthy posts about architectural history, theory, and terminology. 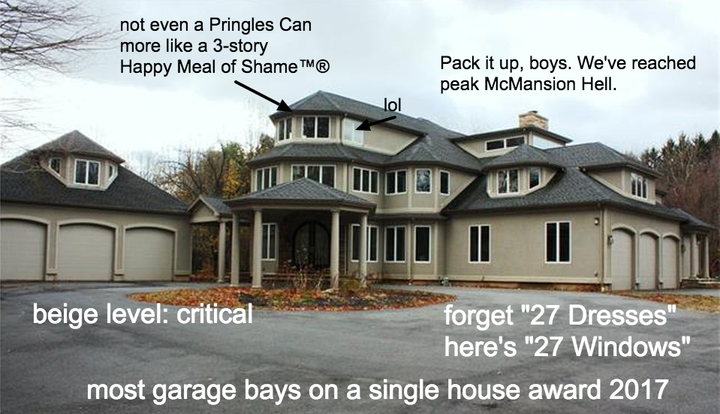 The blog broke down difficult topics like postmodernism, modernity, and all the little bits and pieces of buildings that McMansions so catastrophically fail to get right.

Fans of the blog tweeted Monday that they were “so angry,” declaring the case “garbage,” calling Zillow's letter “so stupid,” and saying that the company was pulling a “dick move.”

Many people also pointed to the concept of “fair use,” which under certain circumstances lets content creators use other people’s work for things like criticism, parody, or satire. 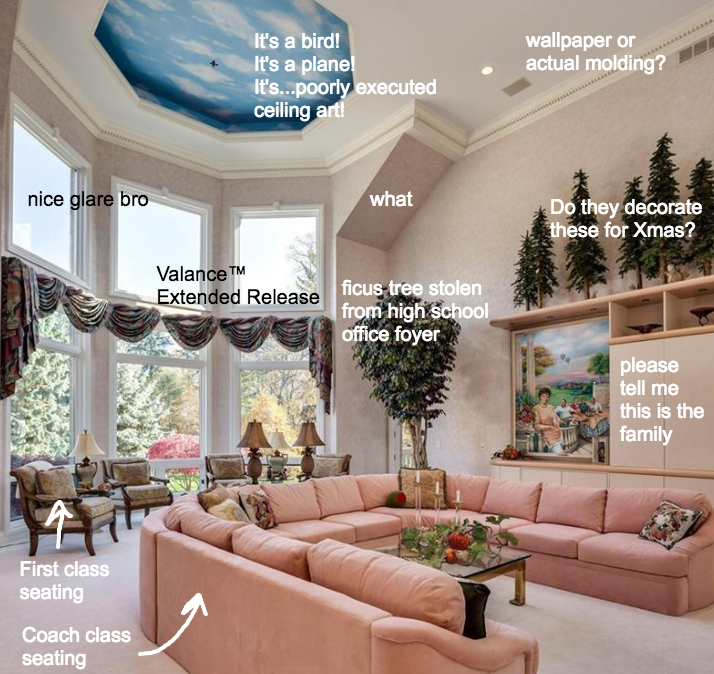 Zillow's letter mentions fair use, but argues it doesn't apply to McMansion Hell. When asked about the concept, Heffter pointed to the agreements Zillow has with the providers of its photos, but did not elaborate on why the company believes Wagner's blog would not qualify as fair use.

The letter also claims McMansion Hell might be violating the Computer Fraud and Abuse Act (CFAA).

However, legal experts who spoke with BuzzFeed News were not impressed with Zillow’s arguments. 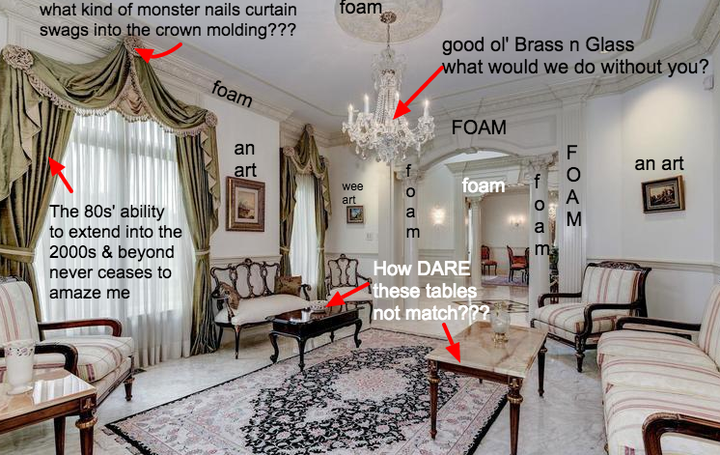 Orin Kerr, a law professor at George Washington University, said in an email that “Zillow's suggestion that it's a CFAA violation to take pictures from their public website is very weak.”

“That's probably why they made it only in passing,” he added in an email.

And Ken White, an attorney who writes for the legal blog Popehat, told BuzzFeed News that McMansion Hell did qualify as fair use. He argued Zillow and McMansion hell aren't competing businesses, and that “all of the fair use factors are in the bloggers' favor.”

Jeff Becker, an entertainment and intellectual property lawyer, said that fair use arguments rely on whether or not a piece of media is transformative or offers commentary on the original work — in this case real estate photos. He said the “satire-parody issue may be present” and that McMansion Hell “very well could fall within fair use.”

“It would be a very hard case to win in court,” Becker added, referring to Zillow's argument.

White also said that Zillow appears to have been trying to “make a satirical blogger shut up rather than face the costs of vexatious litigation.” He added that the reputations of both the company and the attorney who sent the letter “will take a hit, and they deserve it.”

“I think it's plainly fair use,” White said, “and that Zillow's threats are meritless and frankly thuggish.”