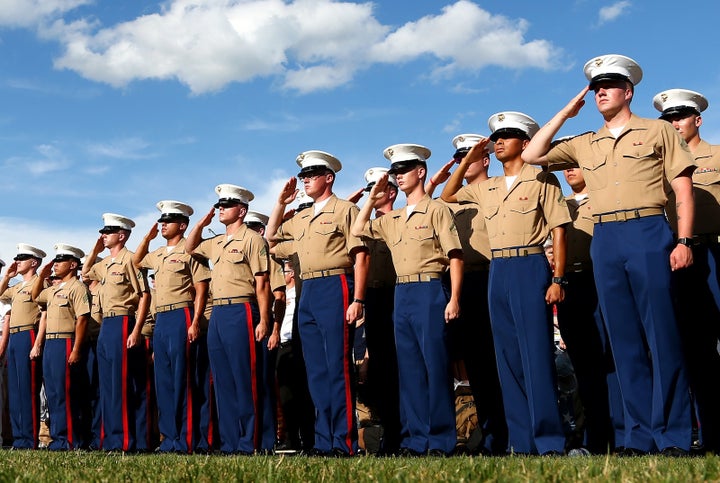 The Marine Corps provided an update on Monday on its response to revelations of widespread harassment and bias against women Marines online. In March, the Center for Investigative Reporting said hundreds of Marines were under investigation for posts in the private Facebook group Marines United, which included sharing nude photos of women service members, posting lewd comments, making threats, and in one case, real-world stalking.

Further reporting showed the behavior extended throughout other branches of the military on sites in addition to Facebook. As of Monday, the Naval Criminal Investigative Service has reviewed 131,000 images across 168 social media sites, linked to 89 people considered “persons of interest.”

Of those people, 22 were civilians and 67 were active-duty or reserve Marines, officials said. NCIS is continuing to investigate five Marines, and the other 62 cases have been passed to Marine commanders.

“To date, command dispositions have resulted in one summary court-martial, two administrative separations, seven non-judicial punishments, and 22 adverse administrative actions,” a Marine Corps press release said. “These cases span beyond the Marines United Facebook page and include a spectrum of behavior. While many cases involve photos, clothed or explicit, some involve verbal remarks without images.”

The summary court-martial took place June 29, and the Marine pleaded guilty. He was sentenced to 10 days confinement, a reduction of rank by three grades, forfeiture of two-thirds of a month's pay, and he will be separated from the Marines.

“I think it’s important to recognize that our understanding of the issue has evolved over time,” said Gen. Glenn Walters, head of the task force. “How we handle cases today is much different and more effective as a result of what occurred with Marines United. Moving forward, we are planning to establish a permanent structure that can address all of the factors that contribute to the negative subculture that has allowed this behavior to exist.”

LINK: The Marines Updated Its Social Media Policy After A Nude Photo Scandal