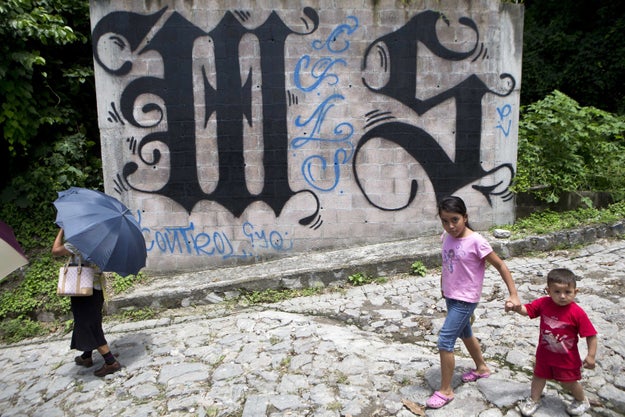 A family walks by a wall covered by a symbol from the Mara Salvatrucha, of MS-13 gang in Ilopango, El Salvador.

The Feds quietly unsealed an indictment this week charging four alleged MS-13 members with the April 2017 murders of four Long Island men “for the purpose of gaining entrance to and maintaining and increasing position” in the violent street gang.

Omar Villalta, Alexis Hernandez, Santos Ortiz-Flores, and a fourth person whose name has not been revealed are accused in the killings where the victims ranged in age from 16 to 20. The charges are part of a superseding indictment that accuses dozens of alleged gang members with drug conspiracy charges and several other murders of Long Island youths.

Last April, the bodies of Jorge Tigre, Jefferson Villalobos, Justin Llivicura, and Michael Lopez were discovered hidden in the tall grass near a soccer field in a Long Island park. The killings sent shockwaves through an area of New York state still reeling from the killings in January 2017 of several high schoolers from the surrounding community, including two teenage girls bludgeoned as they walked home from school. MS-13 members were charged in this earlier wave of killing in March 2017. 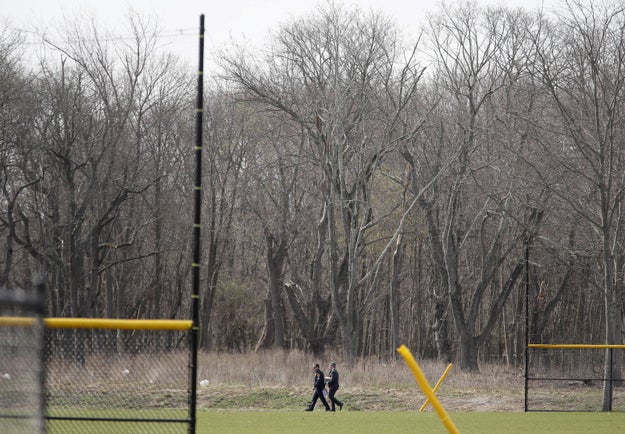 Emergency personnel walk near the crime scene where four bodies were found in Central Islip, N.Y.

The rash of violence triggered a response from the Trump administration, which has used MS-13 as a symbol to argue that lax immigration laws are to blame for the spread of violent gangs.

“MS-13 has become a symbol of this plague that has spread across our country and into our communities,” US Attorney General Jeff Sessions said in April at a meeting of his Organized Crime Council and Organized Crime Drug Enforcement Task Force. “Because of an open border and years of lax immigration enforcement, MS-13 has been sending both recruiters and members to regenerate gangs that previously had been decimated, and smuggling members across the border as unaccompanied minors.”

The communities on Long Island where these murders have taken place have high populations of Central American immigrants from places such as Guatemala and El Salvador.

Three of the men charged in the murders of the four boys are in custody, News 12 reports. At least one of the men, Omar Villalta, was arrested in Charlottesville, Virginia, according to court records.

BuzzFeed News has reached out to the Suffolk County Police and the Eastern District of New York for comment.

LINK: What Is MS-13, And Why Is Trump Suddenly Obsessed With This Gang?