Minneapolis officials have left several questions unanswered about why Justine Damond was fatally shot by an officer after calling 911 to report about a possible sexual assault.

Justine Ruszczyk, an Australian yoga instructor and spiritual healer, who used the last name of her fiancé, Dan Damond, was fatally shot by Officer Mohamed Noor of the Minneapolis Police Department after she called 911 to report a possible sexual assault near the house they shared on Saturday night.

Her family and friends in Minnesota and Australia are frustrated by the lack of information from authorities about the mysterious circumstances that led Noor to fire his weapon at a pajama-clad Damond in the alley near her house.

Questions have also been raised about why the two officers' body cameras were not on during the incident.

In her 911 call — here's transcripts of the first and second calls — Damond said she heard a woman making “sex noises” but wasn't sure “if she’s having sex or being raped.”

Police are not investigating her report of possible sexual assault, a police spokesperson told BuzzFeed News Wednesday. The officers canvassed the area and “did not find anything” that would lead the police to investigate further.

Mayor Betsy Hodges and Police Chief Janeé Harteau have acknowledged people's frustration with the lack of information about the shooting. Harteau said she has asked to expedite the investigation to “provide transparency and to answer as many questions as quickly as we can.” 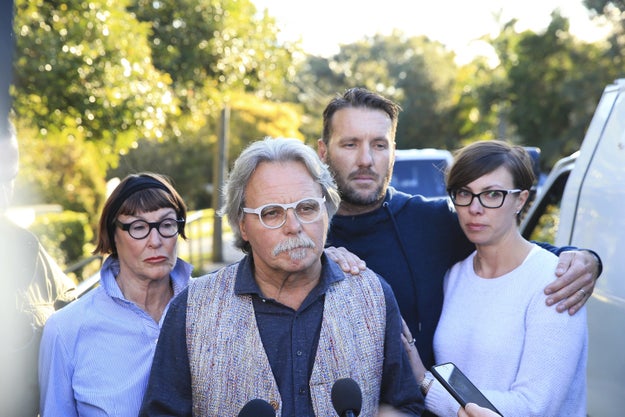 Damond's family addresses the media outside their house in Sydney, Australia.

She told the 911 operator, “I can hear someone out the back and I, I’m not sure if she’s having sex or being raped.” Damond said that the woman didn't sound like “she's enjoying it.” She added, “It sounds like sex noises, but it’s been going on for a while and I think she tried to say help and it sounds distressed.”

Harrity, who has been with the police force for one year, was driving the squad car and Noor, who has been an officer for nearly two years, was in the passenger seat.

“Immediately afterward,” Damond approached the driver's side window of the squad car, according to Harrity's account. She was in her pajamas, sources told the Star Tribune, and briefly spoke with Harrity.

Harrity said that Noor then fired his weapon across the car, striking Damond once in the abdomen through the open driver's side window.

One of the officers then calmly tells the dispatcher, “Shots fired…we got one down.”

“The officers immediately exited the squad car and provided medical attention until medical personnel arrived,” the BCA said in a press release on Tuesday.

Approximately 14 minutes elapsed between the time Damond called 911 and when the officers informed the dispatcher that one person was shot, the incident report shows.