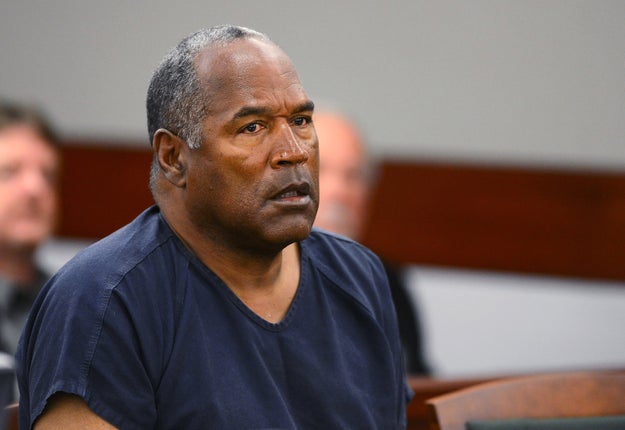 O.J. Simpson appears at an evidentiary hearing in Clark County District Court in Las Vegas in 2013.

O.J. Simpson could be granted parole Thursday after serving nine years of his 33-year prison sentence for armed robbery and assault in Las Vegas a decade ago.

In 2007, Simpson and several friends, including Clarence “C.J.” Stewart, burst into a Las Vegas hotel room armed with guns and stole about $100,000 worth of his sports memorabilia from collectors Alfred Beardsley and Bruce Fromong, who had been expecting to meet a wealthy buyer.

The next year on Oct. 3, Simpson was convicted of robbery and assault charges exactly 13 years after a jury found him not guilty of killing ex-wife Nicole Brown Simpson and her friend Ronald Goldman. 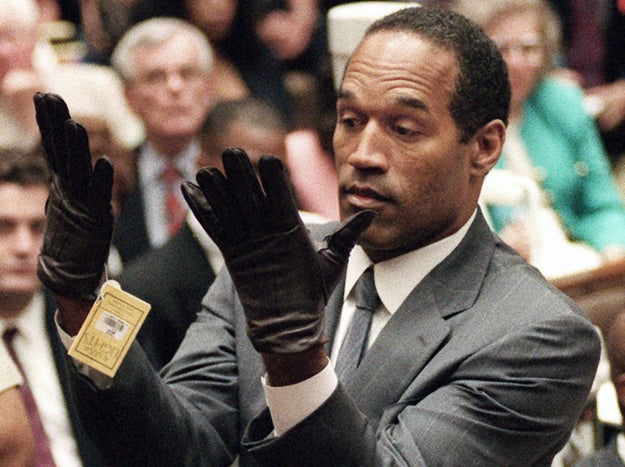 O.J. Simpson holds up his hands before the jury for his murder trial in 1995.

Stewart was also convicted for his role, but was released more than a year later after the Nevada Supreme Court overturned his conviction, finding that he had been denied a fair trial by being tried alongside the much more famous — and controversial — Simpson.

Simpson, now 70, could be released as soon as Oct. 1 if a second round of parole is granted Thursday, a move many expect to happen, given little if any opposition.

Victims at parole hearings are allowed to make statements, but Beardsley died in 2015, and Fromong has said that while he suffered several heart attacks and significant financial losses after the robbery, he has forgiven Simpson.

Simpson was previously granted parole in 2013 for a series of charges related to the robbery, but had to wait another four years to become eligible for parole on the remaining convictions.

At the 2013 parole hearing, Simpson recalled telling the prison warden upon entering the Lovelock Correctional Facility in Nevada that he was going be “the best prisoner they ever had.”

In the years that followed, he took classes and coached other prisoners. His friend also told the Associated Press that he leads a prayer group, mentors inmates, and serves as commissioner of the prison yard softball league.

Simpson said he has also apologized to all the victims involved and truly regrets his actions.

The father of four also said the sports memorabilia he stole in the robbery has since been returned to him by the state of California.

But even when he is eventually released, Simpson’s legal troubles are far from over. 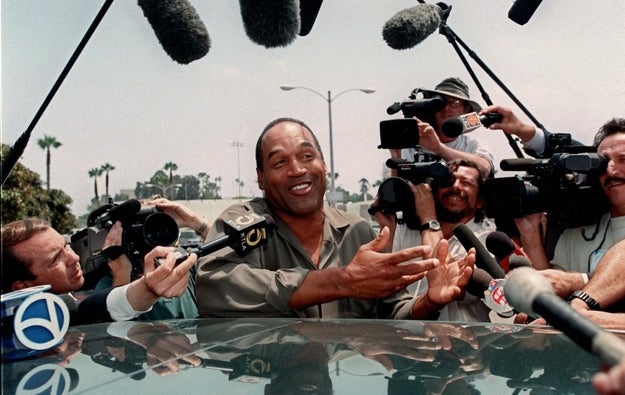 O.J. Simpson conducts an impromptu news conference in 1997 after a hearing in which the government demanded more than $600,000 in back taxes.

He was found civilly liable in 1997 for the deaths of Brown and Goldman and was ordered to pay their families $33.5 million. However, the attorney for the Goldman family, David Cook, told BuzzFeed News that the amount Simpson now owes has grown to more than $50 million.

It is unclear if Simpson still receives a football pension that was once estimated at $19,000 a month, but even if he did, that money would be “near impossible” to reach an amount to satisfy for the civil judgment, Cook added. Any movie or television residuals, though, “we reach that.”

Simpson's ability to earn money has been hampered by his incarceration, but he again became part of the national conversation with The People Vs. O.J. Simpson, the FX hit that chronicled his dramatic murder trial of 1995.

What happens after prison is anyone's guess.

“We are all strangers in O.J. Simpson’s strange land,” Cook said, “because at every turn it gets stranger and stranger, from the white Bronco, the LA trial, to the acquittal, to the wrongful death.”