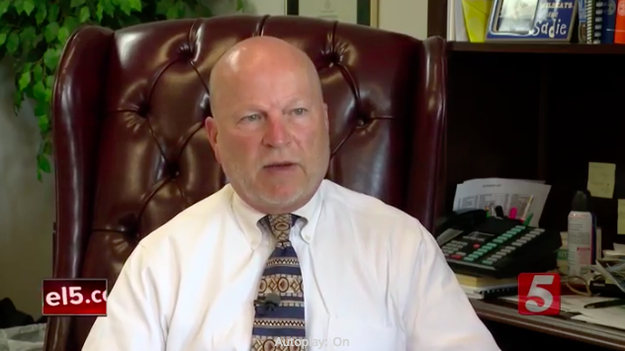 Judge Sam Benningfield, who signed a standing order for the program.

A jail in Tennessee is offering reduced sentences to inmates who voluntarily get a vasectomy or birth control implant in an effort to reduce the number of repeat offenders who can’t afford child support.

In what critics are calling unconstitutional and probably illegal, a new program enables inmates in White County, Tennessee, to get out of jail 30 days early if they undergo the birth control procedures.

Local judge Sam Benningfield, who conceptualized and signed a standing order permitting the program, told Channel News 5 that he hopes to break a “vicious cycle” of criminals who keep coming into his court room, struggling to find a job and unable to afford child support.

“I hope to encourage them to take personal responsibility and give them a chance, when they do get out, to not to be burdened with children,” Benningfield said. “This gives them a chance to get on their feet and make something of themselves.”

But the ACLU contends rewarding inmates with less jail time in exchange for contraception or sterilization is unconstitutional.

“Such a choice violates the fundamental constitutional right to reproductive autonomy and bodily integrity by interfering with the intimate decision of whether and when to have a child, imposing an intrusive medical procedure on individuals who are not in a position to reject it,” the organization said in a statement Wednesday.

Since the controversial program began in May, 32 women have gotten a Nexoplan implant, which helps prevent pregnancies for up to four years, and 38 men are waiting to have a vasectomy, performed at no charge by the Tennessee Department of Health.

Benningfield, who said he launched the effort after speaking with state health officials, admits that the program might not be “entirely successful.”

“But if you reach two or three people, maybe that’s two or three kids not being born under the influence of drugs. I see it as a win-win,” he said.

“It’s concerning to me; my office doesn’t support this order,” Dunaway told Channel News 5. “It’s incomprehensible that an 18-year-old gets this done, it can’t get reversed, and then that impacts the rest of their life.”

BuzzFeed News has reached out to Benningfield for comment.