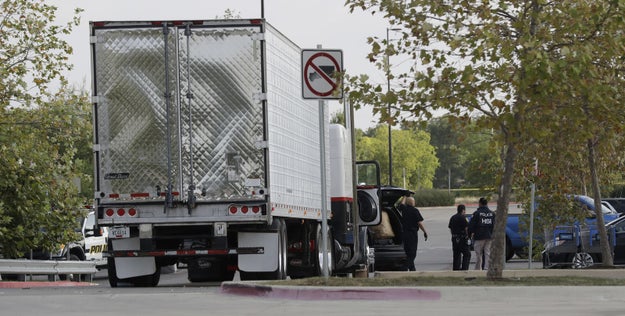 San Antonio police officers investigate the scene where eight people were found dead in a tractor-trailer.

Dozens of undocumented immigrants crammed into an unrefrigerated tractor-trailer in the stifling summer heat of Texas were forced to take turns breathing through one hole in a wall, according to a criminal complaint released Monday.

At least 10 people have died after being transported in the tractor-trailer, which was found by authorities in a Walmart parking lot early Sunday. Eight people were found dead inside, and at least 30 others were transported to local hospitals. Two of those individuals died overnight.

James Matthew Bradley, the 60-year-old Florida driver of the tractor-trailer, was charged with one count of transporting illegal aliens, the Department of Justice announced Monday.

Authorities allege that Bradley illegally transported the undocumented immigrants, resulting in the deaths of 10 people.

If convicted, he faces a sentence of life imprisonment or death, a $250,000 fine, and three years of supervised release.

Police believe the deaths were caused by asphyxiation and heat exposure.

Authorities called it a “horrific” case of human trafficking. 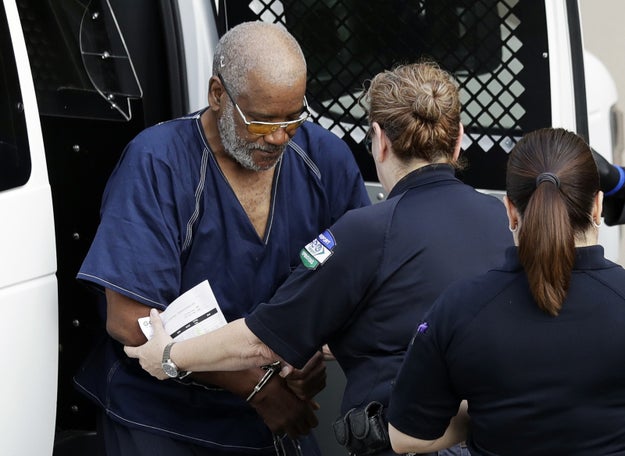 Authorities who responded to a call shortly after midnight on Sunday encountered the tractor-trailer with a number of people standing and lying in the back of the truck and Bradley in the cab.

Bradley claimed that he was transporting the trailer from Schaller, Iowa, to Brownsville, Texas, to deliver it to its new owner. He denied knowing there were people inside the trailer, and claimed that he only discovered them when he left the vehicle to urinate.

Bradley told authorities that he stopped at the Walmart after hearing “banging and shaking in the trailer.” Upon opening the trailer, Bradley said about 30 to 40 people ran out, telling police he was surprised when “he was run over by 'Spanish' people and knocked to the ground,” according to the criminal complaint.

He also said that he noticed bodies “just lying on the floor like meat,” the complaint states.

Bradley told authorities that he knew the trailer refrigeration system didn't work and the vent holes “were probably clogged up.”

Bradley also allegedly attempted to call his wife, but not 911.

Some of the undocumented immigrants interviewed by authorities described how they had been smuggled in different groups at different times across the Rio Grande River near Laredo, Texas.

Some of them were harbored in stash locations and then were picked up by the tractor-trailer on Sunday. They stated differing fees they paid for being transported.

Three of the undocumented immigrants interviewed estimated that the trailer contained anywhere between 70 to 200 people during the trip to San Antonio, Texas.

One of the undocumented immigrants, who was part of the last group picked up by the trailer, told authorities that the inside was “pitch black” and was already hot when he entered.

He also told investigator that no one was provided any food or water and that despite making noises to get attention, “nobody ever came.”

Later at night, a man opened the rear door of the trailer and provided each group with a different color tape to identify them to the waiting smugglers at the destination, the complaint states.

The man assured them that the trailer had refrigeration and told them not to worry about the trip, according to the complaint.

As the night wore on, people began have trouble breathing and some started to pass out, the complaint said.

People began hitting the trailer walls and making noises to get the driver's attention, but he did not stop, according to the undocumented immigrants interviewed by authorities.

“People had a hole in the trailer wall to provide some ventilation and they started taking turns breathing from the hole,” the complaint states.

When the driver arrived at the destination, he braked hard and people inside the trailer fell over because they were so weak, one of the undocumented immigrants told authorities. When the doors opened, they swarmed out and ran into six black SUVs that were waiting to pick them up, the witness said. The SUVs were filled in a matter of minutes and left, he added.

“To maximize their criminal profits, these human smugglers crammed more than 100 people into a tractor-trailer in the stifling Texas summer heat resulting in 10 dead and 20 others hospitalized,” acting ICE Director Thomas Homan said in a statement.

“Human smugglers have repeatedly demonstrated that they have absolutely no regard for human life,” he added, adding that authorities would “pursue these smugglers and bring them to justice.”

LINK: At Least Ten People Died In What Police Say Was A Human Trafficking Crime