The largest jamboree on record was in 1960, the Boy Scouts of America told BuzzFeed News.

President Donald Trump made another false claim about crowd size — this time at the National Scout Jamboree on Monday. 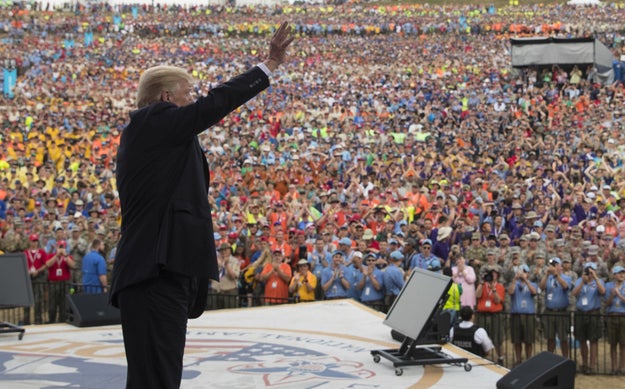 During his overtly political speech to a gathering of Boy Scouts in West Virginia, Trump claimed several times that the crowd was “record-setting.”

“Nineteenth Boy Scout Jamboree, wow, and to address such a tremendous group,” he said at the start of his speech.

Later, he bragged about the size of the crowds again, saying, “By the way, what do you think the chances are that this incredible massive crowd, record setting, is going to be shown on television tonight? One percent or zero?”

Then he went on to berate the media.

The organization said that while they could not estimate the exact size at Monday's event, “we can tell you the Boy Scouts of America welcomes 40,000 Scouts, Venturers, volunteers and other participants to the Summit Bechtel Reserve in West Virginia over the course of the ten-day event.”

The BSA added, “This is not our largest jamboree on record. To the best of our knowledge, it was in 1960, when more than 56,000 Scouts and volunteers gathered in Colorado Springs, Colorado, for the BSA’s fifth National Jamboree.”

President Dwight D. Eisenhower addressed the BSA during its 1960 jamboree.