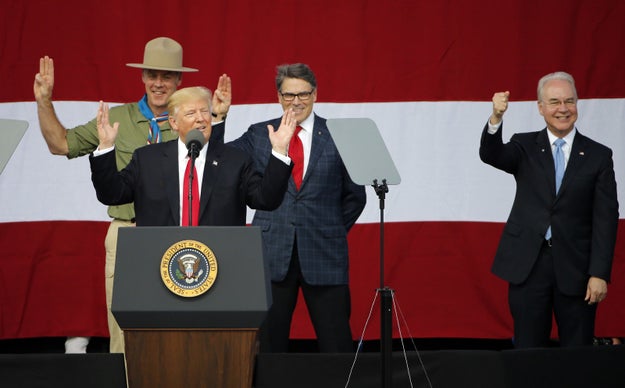 Trump kicked off his speech to throngs of 12 to 18-year-olds at the National Scout Jamboree, by asking rhetorically “Who the hell wants to speak about politics when I'm in front of the Boy Scouts, right?” He then spent most of the speech talking about politics.

Over the course of his 35 minute address, Trump joked about firing Tom Price, the secretary of Health and Human Services, if Republican efforts to repeal Obamacare fail; criticized the “fake media” several times; celebrated the margin of his electoral victory over Hillary Clinton; and bragged about the economy and stock market.

The president also boasted over the size of the crowd, claiming a record 45,000 people were in attendance, but that the news media would report “it's about 200.”

“What do you think the chances are that this incredible, massive crowd, record-setting, is going to be shown on television tonight? One percent or zero,” he told the gathering. “The fake media will say President Trump spoke before a small crowd of Boy Scouts today. That's some — that is some crowd. Fake media, fake news.”

The Boy Scouts of America told BuzzFeed News in a statement it could not confirm Trump's claim. 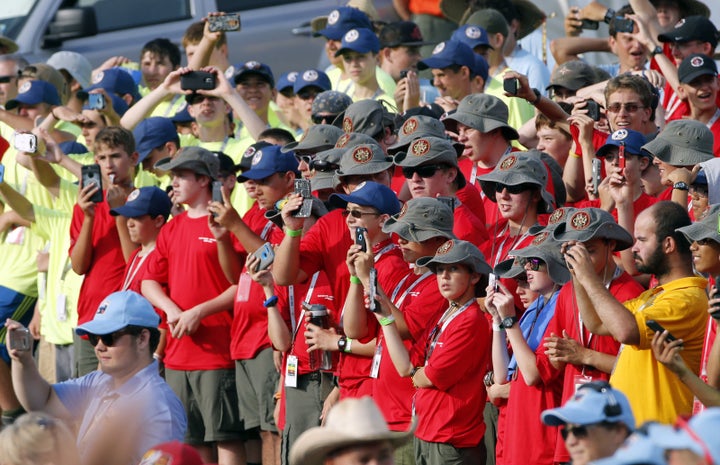 Trump brought up Washington, DC, which he called “the swamp,” saying his disparaging nickname for the nation's capital should be changed to “the cesspool or perhaps the word sewer, but it's not good.”

The president noted members of his cabinet who were former Boy Scouts, including Price, Secretary of State Rex Tillerson, and Vice President Mike Pence.

“Many of my top advisers in the White House were scouts. Ten members of my cabinet were scouts,” Trump said. “Can you believe that?”

He also discussed the Republican effort to repeal Obama's health care law, the Affordable Care Act, saying Price had “better” get the votes to “kill this horrible thing known as Obamacare that's really hurting us.

“He better get Sen. [Shelley Moore] Capito to vote for it,” Trump said referring to the junior senator from West Virginia, who has been on the fence about supporting the Republican health care bill. “He has to get the other senators to vote for it.” 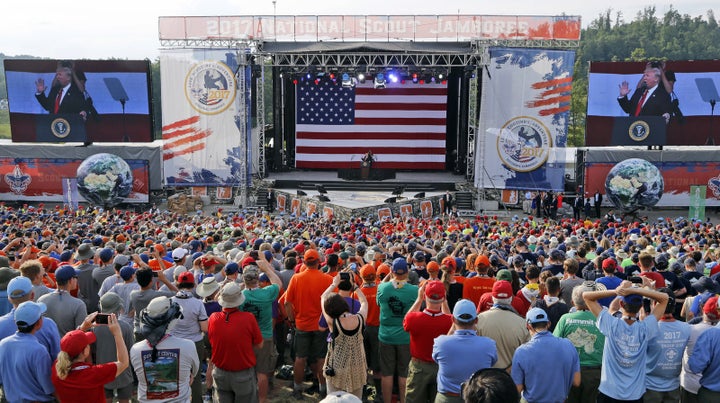 Trump then attacked former President Barack Obama for not attending the gathering. “By the way, just a question, did President Obama ever come to a jamboree?,” he said. (Obama instead recorded a video message for the gathering.)

While extolling the virtues of hard work, Trump told a lengthy story about William Levitt, a real estate developer credited with inventing the suburb but who is also seen as a controversial figure for refusing to sell homes to black people. It's not the first time Trump has talked about Levitt — he referenced him while he was on the campaign trail and in his 2004 book Trump: How to Get Rich.

“And I saw him at a cocktail party and it was very sad because the hottest people in New York were at this party,” Trump said. “And I see sitting in the corner, was a little old man who was all by himself. Nobody was talking to him. I immediately recognized that the man was the once great William Levitt of Levittown.”

The president's anecdote focused on how Levitt lost “momentum” after he retired and then tried to get back into the real estate business by buying his company, but “in the end he failed and he failed badly.”

Trump compared it to his run for the presidency, once again disparaging the “dishonest” media for saying he couldn't win the election.

“Do you remember that famous night on television, November 8, where they said, these dishonest people, where they said there is no path to victory for Donald Trump?” the president asked.

“But do you remember that incredible night with the maps and the Republicans are red and the Democrats are blue and that map was so red it was unbelievable and they didn't know what to say,” Trump continued. “And you know, we have a tremendous disadvantage in the Electoral College. Popular vote is much easier. We have — because New York, California, Illinois, you have to practically run the East Coast and we did. We won Florida, we won South Carolina, North Carolina, Pennsylvania.”

Trump then moved on to a recent jobs report and the stock market.

“We're going to be bringing back very soon trillions of dollars from companies that can't get their money back into this country and that money is going to be used to help rebuild America,” Trump said. 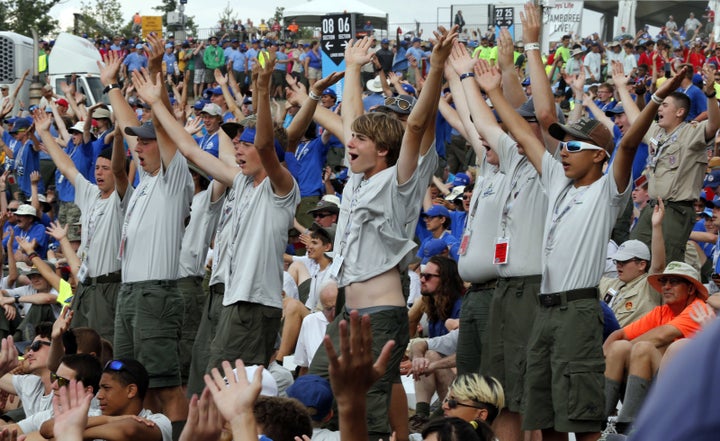 He also brought up the so-called war on Christmas, telling the scouts, “In the Scout Oath, you pledge on your honor to do your best and to do your duty to God and your country. And by the way, under the Trump administration, you’ll be saying, merry Christmas again when you go shopping. Believe me. Merry Christmas. “

Trump concluded the speech by saying he was proud of Boy Scouts and that he had known many in his life who were “winners.”

“Remember your duty, honor your history, take care of the people God put into your life and love and cherish your great country,” Trump said. “You are very special people.”

“If you do what we say, I promise that you will live scouting's adventure every single day of your life and you will win, win, win and you will help people in doing so,” Trump said.

After the speech, current and former Boy Scout troop leaders reacted with disappointment to Trump's politicization of the event.

Ray Hagen, a fundraising coordinator for a Boy Scout troop in Minnesota, told BuzzFeed News he was “disappointed” with Trump's speech.

“I was just kind of disappointed overall that the president decided to go that direction to an organization that is supposed to be non political,” he said.

Hagen has two sons involved in scouting and listed a series of service projects they have done this summer including planting trees, beautifying parks, and planting gardens. He said those are the kinds of things scouting is about, and criticized Trump for “goading the boys into booing his political opponents” at the jamboree.

Brett Nicholson, a parent to three Boy Scouts and an assistant scoutmaster in a west Houston, Texas, troop, said he was “disgusted” by Trump’s speech.

“I just think it’s really sort of shameful that our current president chose to use it as an opportunity to have another rally for his own ego,” he said.

Nicholson has been involved in scouting for years — two of his sons already achieved the top rank of Eagle Scout, and his third son is almost there — and his troop includes a diverse group of more than 100 boys. He praised scouting as an institution, and added that he could not recall any event where he had heard a speech as politicized as Trump's/.

“It sickens me,” Nicholson said. “It looked like he’s turning them into the Hitler youth.”