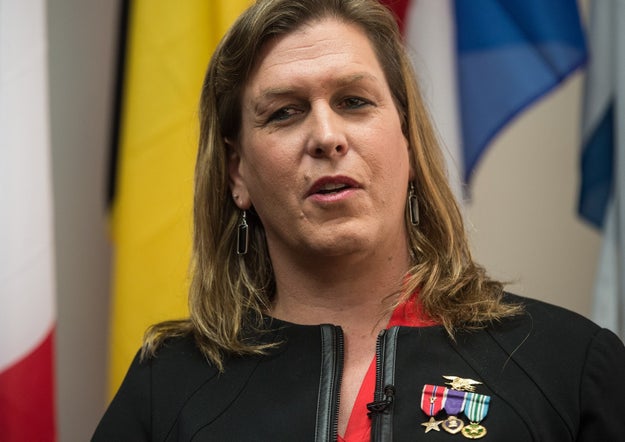 Kristin Beck spent 20 years in the navy: she served in Afghanistan, Iraq, and racked up awards for her bravery, including the Purple Heart and the Bronze Star with Valor. She also came out as a transgender woman in 2013.

This morning, when she saw that President Donald Trump had tweeted that transgender people like her will no longer be allowed to serve in the military, her initial reaction was disbelief.

“There’s a bunch of WTFs. This doesn’t make any sense,” the retired Navy SEAL told BuzzFeed News. “This upsets a lot of people and I think it’s a surprise to a lot of folks.”

Trump's tweets came weeks after the House narrowly voted against a bill that would have denied transgender service members gender transition-related medical care.

The president's tweets suggest that spending on health care for transgender service members was one of the considerations in making his decision — that amount is actually only a small percentage of overall military health care spending (between $2.4 million and $8.4 million of a total $49.3 billion in F.Y. 2014, according to this study).

“That’s a cop out. It’s something else because the money was really not that much. Medical costs for transgender people are the equivalent of one price of one wheel of a fighter…it’s a leadership problem, take care of your people,” she said.

In 2014, documentarians Sandrine Orabona and Mark Herzog made a feature documentary about her life as a transgender woman and leader in the military. Beck says Trump and his team in the White House would do well to watch the film and educate themselves about both trans people and the military.

“The problem is education and if you watch that film there will definitely be a little bit of enlightenment of what’s going on,” she said. “Watch that film before you start throwing out accusations and anything else.”

Beck says the move is “a mistake”—that she hopes it will galvanize the military and transgender communities against Trump in the coming elections.

“We have a huge community and he just empowered the community. He gave the community one flag to join under. One tweet changed the elections in 2018. It changed the presidential race in 2020,” she said. “We’re going to rise up, change the landscape of America.”

“This is about America. If you can take one word to describe America it's liberty. You’re taking for granted that liberty and you’re also saying that liberty only applies to you and doesn’t apply to me,” she said.

And she wants to say this to the thousands of active serving transgender members in the military right now: “Don’t panic, people are working on it, and it’s going to be okay.”

LINK: Trump Says Transgender People Cannot “Serve In Any Capacity” In The Military