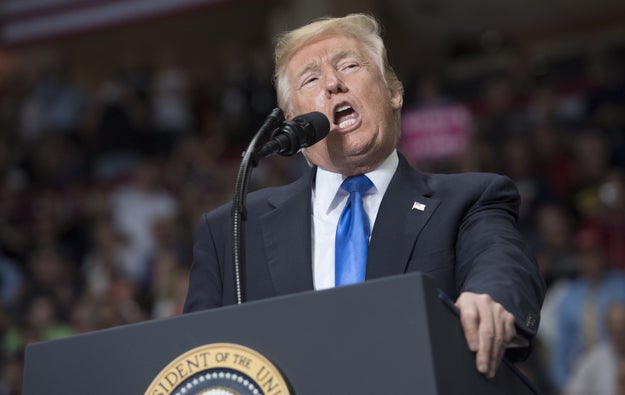 President Trump tweeted on Wednesday that transgender people cannot “serve in any capacity in the U.S. Military,” repeating a claim from conservative Republicans that transgender service members disrupt the ranks and add medical costs that undermine troop readiness.

The announcement comes one week after the US House narrowly rejected an effort to roll back transgender military rights, with a couple dozen Republicans joining every Democrat to vote down an amendment that would have denied medical care required for gender transition, such as prescription drugs and surgeries.

In 2016, under the Obama administration, then-Defense Secretary Ash Carter expressed support for transgender people serving in the military, stating nothing “but their suitability for service should preclude” them from serving. He enacted a policy that allowed transgender people to serve openly and receive transition-related care, while setting a plan in motion to enlist new transgender troops. Most recently, the Defense Department said it would delay the policy on enlisting.

Following Trump's tweets on Wednesday, one member of Congress from Ohio reacted in support of the Obama-era policy.

Sue Fulton, a member of SPARTA, a group of LGBT people who currently serve or have served in the military and their allies, wrote in an email to BuzzFeed News that “under the authority of the Secretary of Defense, transgender service members have been serving openly, honorably, and with distinction over the past year.”

“They are commanding troops, training new recruits and conducting special operations among many of the responsibilities of the approximately 15k on active duty,” she wrote. “If President Trump chooses to overrule his Secretary of Defense, he will disrupt units, undercut the mission and ruin lives. His comments have nothing to do with military readiness, and he should allow people who have served to determine what’s best.”

Republicans have long argued the cost of gender-transition treatment is exorbitantly expensive, though their stance encompasses a larger effort to resist transgender military integration by claiming it undermines fellow troops.

Sec. Carter had countered that argument last year, noting a study by the RAND Corporation found health care “costs would be minimal” and that “the medical treatment that service members who are currently transgender require is fairly straightforward, well understood.”

Congressman Dan Kildee of Michigan, a Vice Chair of the lesbian, gay, bisexual and transgender (LGBT) Equality Caucus, said in a statement Wednesday that the ban “undermines our military's readiness,” calling it “a slap in the face to the thousands of transgender Americans already serving in the military.”

“Anyone who is willing to put on the uniform of the United States and risk their life in service to our country should be celebrated as patriots, regardless of their gender identity,” he said. “This short-sighted and discriminatory policy will make America less safe.”

And Congresswoman Jeanne Shaheen of New Hampshire, a member of the Senate Armed Services Committee, tweeted Wednesday, “Thousands of transgender service members defend our country. They're patriots & should be applauded not discriminated against by Pres Trump.”

The Williams Institute at the UCLA School of Law estimates there are more than 15,000 transgender troops in the US military.