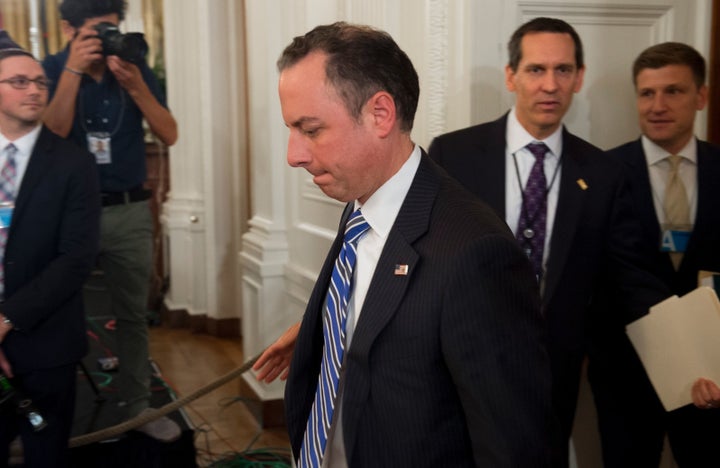 In yet another sign of upheaval at the White House, chief of staff Reince Priebus was ousted on Friday, replaced by Homeland Security Secretary John Kelly, President Trump announced via Twitter.

“I am pleased to inform you that I have just named General/Secretary John F Kelly as White House Chief of Staff,” Trump tweeted. “He is a Great American and a Great Leader. John has also done a spectacular job at Homeland Security. He has been a true star of my Administration.”

“I would like to thank Reince Priebus for his service and dedication to his country. We accomplished a lot together and I am proud of him!” Trump added.

His exit comes after months of speculation that the chief of staff could be ousted at any moment, and just a day after Anthony Scaramucci, the new White House communications director, openly accused Priebus of leaking to the media and called him “a fucking paranoid schizophrenic, a paranoiac.”

In recent days, senior adviser Kellyanne Conway had told people that Priebus was “gone” and that he was trying to figure out his next steps, a source with knowledge told BuzzFeed News. According to Conway, White House staffers who came from the Republican National Committee were out and the administration was “going back to Trump loyalists,” the source said.

Priebus previously served as chairman of the RNC and is considered a Republican Party stalwart, as opposed to a Trump loyalist. During the presidential campaign, he advised Trump to drop out of the race when the lewd Access Hollywood tape was revealed — a fact Trump never let Priebus forgot after his election victory.

As part of his White House role, Priebus was tasked with managing the president's schedule and who he met with, but he had been widely reported to be a “dead man walking” for months.

But his ouster also represents a significant victory for Scaramucci, who had been openly feuding with Priebus for days.

On Wednesday, after telling the New Yorker that he believed Priebus had leaked information about him to the press, Scaramucci tagged his colleague in a (now deleted) tweet:

“In light of the leak of my financial info which is a felony. I will be contacting @FBI and the @TheJusticeDept #swamp @Reince45.

On Thursday morning, Scaramucci denied that he was openly threatening Priebus with an FBI investigation for supposedly leaking, instead claiming it was “public notice to all leakers that all s[enio]r Admin officials are helping to end public leaks”.

That was refuted by his interview in the New Yorker, published Thursday afternoon.

If you want to talk about [Reince Priebus], we have had odds. We have had differences. When I said we were brothers from the podium, that’s because we’re rough on each other. Some brothers are like Cain and Abel. Other brothers can fight with each other and get along. I don’t know if this is reparable or not, that will be up to the president.