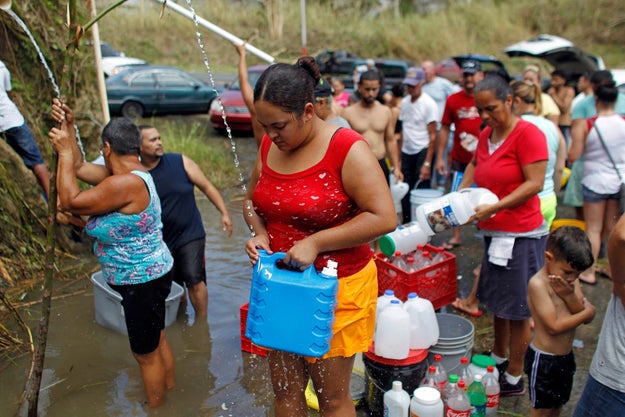 Puerto Ricans are reportedly being given drinking water from Superfund sites, areas that may be contaminated with hazardous waste, amid an ongoing lack of accessible clean water after Hurricane Maria.

“I don't have a choice… This is the only option I have,” local Jose Luis Rodriguez, 66, told CNN, as he filled up bottles of water at the Dorado Superfund site.

Superfund is a federally managed program charged with cleaning up sites contaminated by hazardous and toxic pollutants.

On Wednesday, the Environmental Protection Agency officials noted that they'd heard reports of people trying to obtain water from “hazardous waste” sites and warned against the practice in a statement “as it may be dangerous to people's health”:

There are reports of residents obtaining, or trying to obtain, drinking water from wells at hazardous waste “Superfund” sites in Puerto Rico. EPA advises against tampering with sealed and locked wells or drinking from these wells, as it may be dangerous to people’s health.

EPA documents from 2016 show that the Dorado site has contaminated areas that affect local wells and “confirm the presence of hazardous substances in the aquifer”:

Ground water is contaminated with organic based solvents, primarily tetrachloroethylene (PCE) and trichloroethylene (TCE), which are commonly used in commercial and industrial operations such as dry cleaning and metal degreasing.

It's unknown if the particular well being used on Friday is contaminated. The EPA did not immediately respond to BuzzFeed News's request for comment, but said in a statement to CNN that it plans to test the well over the weekend.

The latest Department of Defense report shows that 34% of Puerto Rico is still without access to fresh drinking water some three weeks after the storm hit.

On Thursday, the EPA announced that it had sent teams to assess Superfund sites in Dorado, Caguas, and San Germán (it has 89 workers on the ground on the island):

These teams are currently assessing the site security and the condition of wells, and will secure the site and post signs as needed. We are sensitive to the suffering and needs of these communities and are working closely with FEMA and the US Army Corps of Engineers to ensure the delivery of water trucks to the neighborhoods near the sites.

The EPA lists 24 Superfund locations on the National Priorities List in Puerto Rico.

Hye-Jin Kim, who works in policy at think tank Frontier Group, created a map of the island's Superfund sites.

Orders around boiling water remain in effect in Puerto Rico. The latest DoD report noted that 29 of 51 wastewater treatment plants are operating on generator power.

And the EPA noted on Thursday that water safety remains an issue, warning people to disinfect fresh water by boiling or using bleach:

Raw sewage continues to be released into waterways and is expected to continue until repairs can be made and power is restored. Water contaminated with livestock waste, human sewage, chemicals, and other contaminants can lead to illness when used for drinking, bathing, and other hygiene activities. According to the Centers for Disease Control and Prevention (CDC), people should not use the water from rivers, streams and coastal water to drink, bathe, wash, or to cook with unless first boiling this water for a minimum of one minute. If boiling the water is not possible, water may be disinfected with bleach.

But boiling water is not always easy, with 83% of the island still without power.