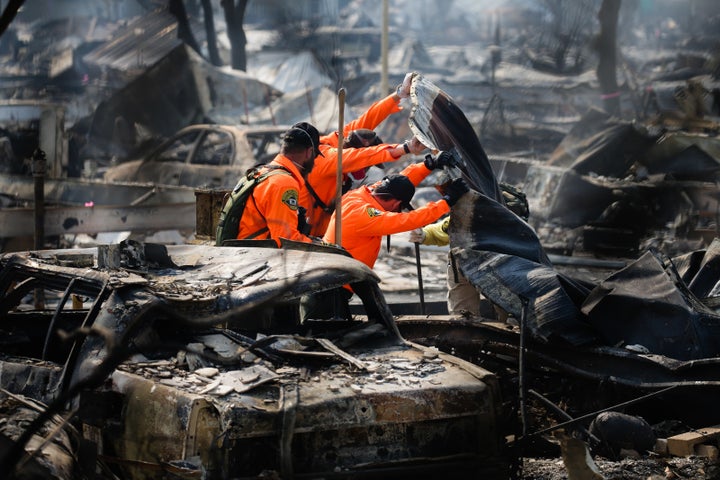 SANTA ROSA, California — Officials in the fire-ravaged Sonoma County in Northern California say they will review how they chose to alert resident late Sunday night, before a deadly blaze overtook subdivisions, trailer parks, and tucked-away neighborhoods with barely any warning.

With only the time to grab wedding photos off the mantle, shoes, pets, and passports, dozens of residents in Sonoma County say they only barely escaped as frantic neighbors banged on their doors, smoke seeped into their homes, and they could see the red glare of flames a few blocks away. At least 19 people are known to have died in Sonoma County.

Those who did get alerts from social media or Nixle, a subscription alert-messaging system, say the warnings arrived after they had already evacuated. In smaller, neighboring counties with no death toll, officials deployed a blaring, alarm-clock-type warning to people's cell phones,

“The fire was our notice,” said Odessa Gunn, whose Mark West Springs neighborhood in the hills above Santa Rosa was one of the first to burn. “Within 30 minutes everything was on fire. We woke up and went out and the car was already on fire. One of the neighbors didn't make it.”

Nearby, Jennifer Wicklund woke up a little before 1 a.m. local time after hearing a barreling wind. She opened her bedroom blinds, saw the red glow, and ran outside to alert her neighbors. 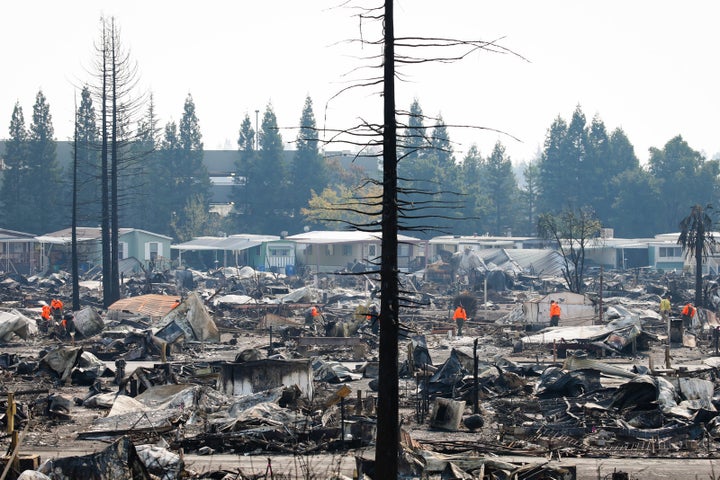 At a packed town hall Friday night, officials in Sonoma County said they will thoroughly evaluate their decision not to send a jarring, wide-ranging cell phone alert that they say would have buzzed the phones of over 500,000 people late Sunday night.

Like an Amber Alert, the Wireless Emergency Alert system sends a vibrating warning to all cell phones in a targeted area, much like the National Weather Service does with flood warnings. But Sonoma County officials said they held back from sending one to the hundreds of thousands of residents because it could have caused unnecessary panic and mayhem, clogging streets and delaying emergency responders. Such a mishap happened in Southern California this past summer.

“It was not a negligent decision. It seemed like the best, most appropriate response at that time,” said Hannah Euser, spokeswoman for Sonoma County. “Half a million people would have gotten an emergency alert, many of them in areas not affected, and it could have been chaos.”

But the Federal Emergency Management Agency, which launched the siren-like system in 2012, refuted the claim that the alerts can't be manipulated. The agency told BuzzFeed News on Saturday that “the alert originator has the option of providing geographic coordinates defining the area where the alert is to be targeted.”

However, a FEMA spokesperson did note that creating such custom alerts is difficult since they are mapped out around cell towers and requires officials to know the “specific location of cell towers, which is not common or easily obtained information.”

In nearby Lake County, a much smaller, less densely populated area also still battling raging wildfires, officials did choose to deploy a mass, shrill alert. Known as “code red,” the public message buzzed a little after 2 a.m. Monday morning to warn residents that the Sulphur Fire, which was first reported at 1:15 a.m., was moving quickly.

“We use it to warn residents immediately of imminent danger,” Lt. Corey Paulich, a spokesman for the Lake County Sheriff’s Office, told BuzzFeed News.

Euser, the Sonoma County spokeswoman, told residents Friday night that officials would reevaluate their alert decisions once the fires are brought under control.

“After this disaster is over, we intend to look into all aspects of how we alerted people,” she said. “You can hold us accountable.” 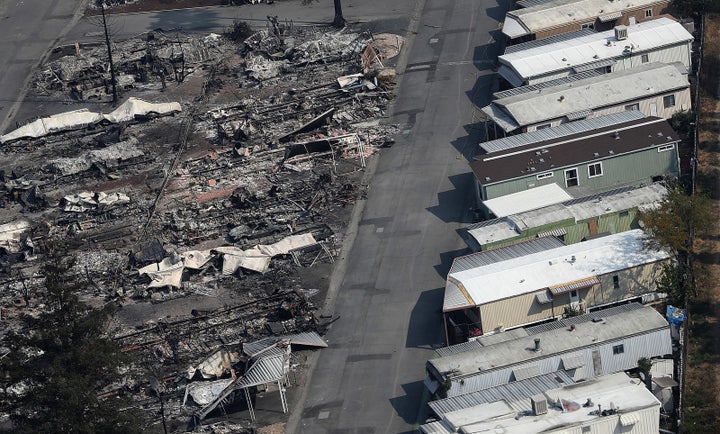 As flames moved in the direction of the city of Clearlake, Lake County officials tailored and geo-targeted an alert imploring mandatory evaluations in that area, sending it to hundreds of residents' phones. Authorities also used Nixle and social media.

Though there have been no reported deaths in his county or in Marin county, which has about half Sonoma's residents and also used a wireless emergency alert, Lt. Paulich noted that many factors contributed to that, such as the fire's location and how prepared people were to move at a moment's notice.

In Napa, where so far four people have died, the roughly 1,500 residents who tapped on the Nixle alert Sunday night couldn't read the full message because the influx had shorted the Sheriff department's server, Mark Eggan, information technology chief, told the Los Angeles Times. The county does not have an Amber-alert system, FEMA confirmed. 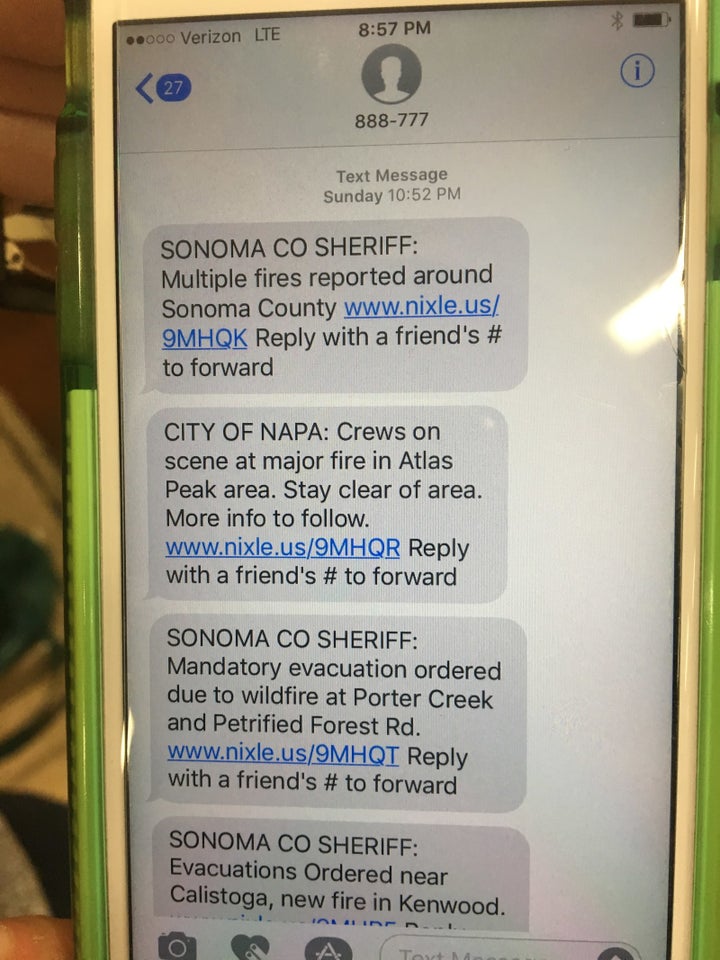 Nixle alerts about the fires in Santa Rosa from Sunday night

Sonoma County Sheriff Rob Giordano explained Wednesday that authorities had sent warnings through robocalls; social media; the Nixle system; and SoCoAlert, which only a fraction of residents had signed up for before the fires.

The first Nixle alert pertaining to the fire hit phones in Sonoma County at 10:53 p.m. Sunday night, about an hour after the fire started. A mandatory evacuation notice came shortly after, at 11:03 p.m., but some people say they didn't get the alerts, or they didn't come in time due to the speed and ferocity at which the fire was moving.

At 2:00 a.m. the fire took a turn, and many people, like Nick and Alyssa Belliveau, were sleeping when the wind-driven flames jumped freeways and rushed up roads.

The Belliveau's home was one of the many reduced to ash in Coffey Park, and Nick Belliveau said Nixle sent its mandatory evacuation warning as they were driving out of their burning neighborhood. 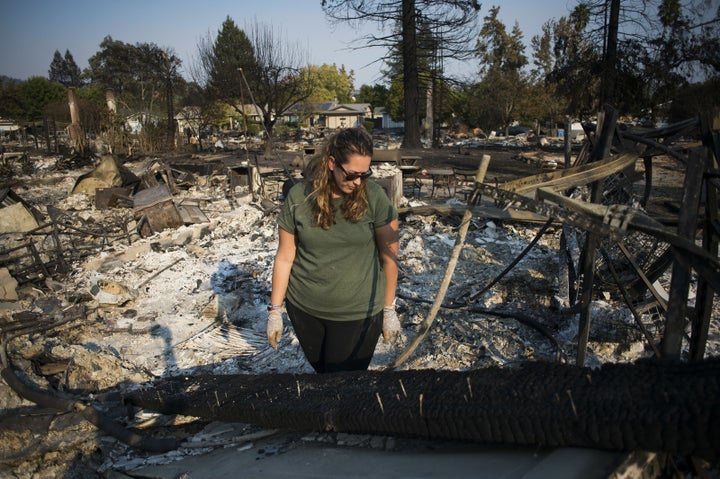 Alyssa Belliveau surveys the damage after her home was completely destroyed by wildfire.

“There were no warnings or evacuation notices,” Alyssa said as she sifted through her home. “We got an alert about Fountaingrove (a nearby neighborhood) that said fire driven by wind, but the fire had already jumped highway.”

The 29-year-old school teacher said a frantic police car showed up as they were getting their two dogs and 11-month-old in the car, but the howling wind silenced any sound from his siren and loudspeaker, imploring people to get out immediately.

Damaged cellphone towers (nearly 80 were knocked down by powerful winds) might have hindered the county’s emergency alert service's text messages from hitting thousands of phones.

“I understand the fires moved so quickly there probably wasn't time to send it out, but it would have been helpful,” said Nick Belliveau, who works as a local police officer.

At Hopper Lane apartments, near Coffey Park, Amy Larkin said she didn't get any alerts to her phone whatsoever. The roaring sound of wind pushing flames into their complex woke up her boyfriend, 28-year-old Bryan Heric, who had enough time to stuff his six-year-old daughter into the car as Larkin ran around banging on neighbors doors begging them to move.

Larkin had been monitoring social media for alerts, which the city of Santa Rosa had been actively updating, but she said they, too, came in after flames had already engulfed their neighborhood.

“These were the only notifications we ever saw. The post about our area came in at 2:12 a.m., 10 minutes after we had already left,” the 28-year-old said. “I don't think they had any idea our homes were on fire.

“Obviously, there was a miscommunication somewhere and it isn't anyone's fault. It all just moved so fast,” she said.