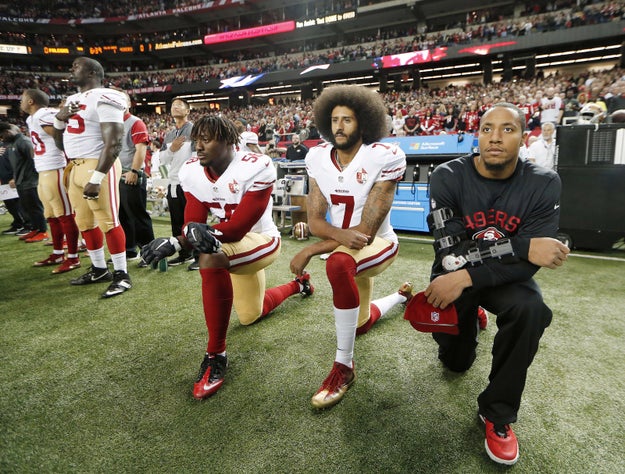 San Francisco 49ers quarterback Colin Kaepernick (7) and outside linebacker Eli Harold (58) kneel during the playing of the national anthem in 2016.

Former San Francisco 49ers quarterback Colin Kaepernick, who started kneeling last year during the national anthem to protest the treatment of minorities by police, has filed a grievance against the NFL, alleging that owners colluded to keep him off the field this season.

The 29-year-old has been without a job through the first six weeks of the NFL season, even after at least four injured quarterbacks created new openings on team rosters. Kaepernick's agent has reportedly reached out to all 32 NFL teams to make sure they know he wants to play.

The move marks another escalation in the ongoing controversy over sports players kneeling or sitting during the national anthem. The protest movement that began with Kaepernick and a handful of other NFL players in 2016 was suddenly propelled this year after repeated criticisms from President Donald Trump.

The president's attacks, including his call for the NFL to fire players who refused to stand during the anthem, prompted displays of solidarity across the league, with many players, coaches and owners linking arms or kneeled during the anthem.

Still, Kaepernick remains unemployed. The grievance, filed Sunday night, alleges that NFL owners “have colluded to deprive Mr. Kaepernick of employment rights in retaliation for Mr. Kaepernick’s leadership and advocacy for equality and social justice and his bringing awareness to peculiar institutions still undermining racial equality in the United States.”

In a statement Sunday, his attorney, Mark Geragos said the complaint was filed “only after pursuing every possible avenue with all NFL teams and their executives.”

“If the NFL (as well as all professional sports leagues) is to remain a meritocracy, then principled and peaceful political protests — which the owners themselves made great theater imitating weeks ago — should not be punished and athletes should not be denied employment based on partisan political provocation by the Executive Branch of our government,” Geragos continued. “Such a precedent threatens all patriotic Americans and harkens back to our darkest days as a nation. Protecting all athletes from such collusive conduct is what compelled Mr. Kaepernick to file his grievance.”

NFL Commissioner Roger Goodell has stated previously that Kaepernick is not being blackballed.