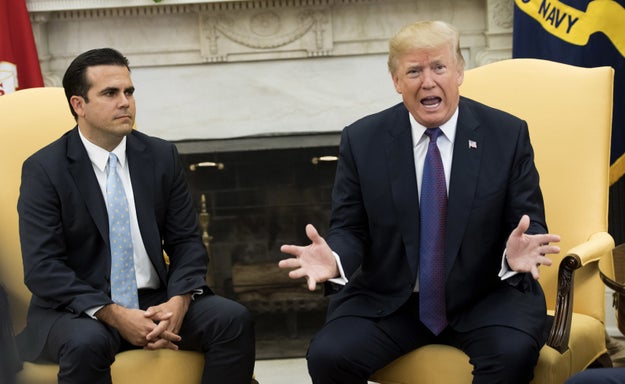 Before a crowd of reporters in the Oval Office on Thursday, President Donald Trump turned to the governor of Puerto Rico sitting by his side to ask him an impromptu question about the White House's response to Hurricane Maria: “Did we do a great job?”

Despite Trump phrasing his question in the past tense, the disaster response in Puerto Rico is far from over. More than one month after the storm made landfall, the situation on the ground remains dire. Less than one in five people in the US territory — whose residents are US citizens — have electricity, one third of residents have no drinking water, and more than one in 10 people still have no cell service, according to the Department of Defense.

“It is a catastrophic situation in Puerto Rico, as you know,” Gov. Ricardo Rosselló said.

Still, Trump had no such doubts about his administration's response to the disaster, confidently giving it a perfect score when asked by a reporter.

The president noted Puerto Rico was recovering from being “grazed” by Hurricane Irma, when it was then struck head-on by Maria.

“There's never been anything like that,” he said. “I give ourselves a 10.”

“We have done a really great job,” the president continued. “Texas, again, really very far along. Florida, very far along, and Puerto Rico is a different kind of a situation because it needs so much infrastructure, but over period of time, that will happen.”

The president also repeatedly said the island's energy grid was in poor shape before the storm, complicating relief efforts. A report commissioned some 10 months before the storm found the power grid was “literally falling apart” and in crisis.

In addition to FEMA, more than 13,000 defense personnel are currently on the ground in Puerto Rico, assisting in the clean-up efforts.

“This is costing a lot of money: having FEMA, having the military, the first responders,” Trump said. “We're doing that because of we have an obligation to Puerto Rico, to humanity, to ourselves. We want to continue to do a great job on that. And we're doing it.” 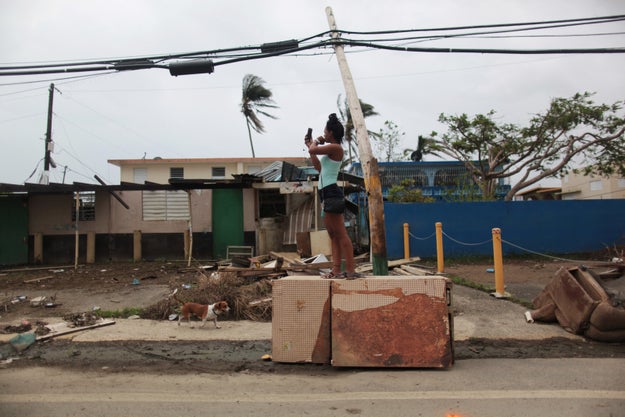 A woman stands on an overturned refrigerator while trying to get a mobile phone signal in Toa Baja, Puerto Rico, on Wednesday.

President Trump visited the island at the beginning of October, memorably tossing paper towels into a crowd in the city of Guaynabo. As of last week, people there were still without electricity and many were without drinking water.

Despite high-profile criticisms from some Puerto Ricans of the administration's response, including the mayor of San Juan (whom Trump later attacked), Gov. Rosselló said the White House had responded to all his government's requests.

But, Rosselló cautioned, “The reality is that we still need to do a lot more for the people of Puerto Rico and that's why we're meeting here. This is not over — not over by a long shot.”

LINK: Here’s What’s Really Happening In Puerto Rico, Despite What Trump Is Saying