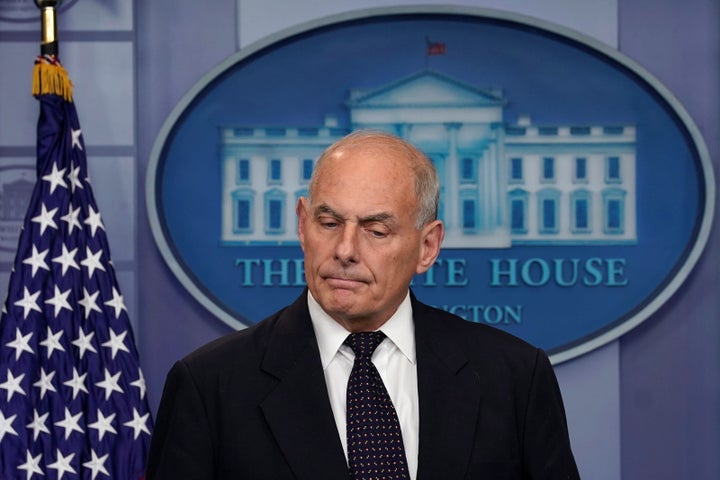 Unearthed footage of a 2015 speech by Rep. Frederica Wilson shows President Trump's chief of staff misrepresented her remarks when he assailed her from the White House press room on Thursday for what he said was “selfish behavior.”

The Florida congresswoman has been the target of criticism from the White House after she told reporters that she heard Trump tell the family of Sgt. La David Johnson, a soldier killed in a secretive operation in Niger, that “he knew what he signed up for.”

Chief of staff Gen. John Kelly condemned Wilson on Thursday for “listening in” on the “sacred” moment. (Wilson has known the family for years and happened to be with them when the call from the president came through on speakerphone).

Kelly also told reporters that the Florida congresswoman used the opening of a new FBI building in the state in 2015 to boast that she had secured funding for the building, calling her “an empty barrel”:

In October — April, rather, of 2015, I was still on active duty, and I went to the dedication of the new FBI field office in Miami. And it was dedicated to two men who were killed in a firefight in Miami against drug traffickers in 1986 — a guy by the name of Grogan and Duke. Grogan almost retired, 53 years old; Duke, I think less than a year on the job. Anyways, they got in a gunfight and they were killed. Three other FBI agents were there, were wounded, and now retired. So we go down — Jim Comey gave an absolutely brilliant memorial speech to those fallen men and to all of the men and women of the FBI who serve our country so well, and law enforcement so well.

There were family members there. Some of the children that were there were three or four years old when their dads were killed on that street in Miami-Dade. Three of the men that survived the fight were there, and gave a rendition of how brave those men were and how they gave their lives.

And a congresswoman stood up, and in the long tradition of empty barrels making the most noise, stood up there and all of that and talked about how she was instrumental in getting the funding for that building, and how she took care of her constituents because she got the money, and she just called up President Obama, and on that phone call he gave the money — the $20 million — to build the building. And she sat down, and we were stunned. Stunned that she had done it. Even for someone that is that empty a barrel, we were stunned.

But, you know, none of us went to the press and criticized. None of us stood up and were appalled. We just said, okay, fine.

Wilson told CNN early on Thursday morning that Kelly had lied about her remarks. (She also denied them on Wednesday evening to the Miami Herald).

“I was not even in Congress in 2009 when the money for the building was secured,” she told CNN. “So that's a lie. How dare he.”

“However, I named the building at the behest of Director Comey with the help of Speaker Boehner, working across party lines. So he didn't tell the truth.”

Wilson also said she thought Kelly's use of the term “empty barrel” was racist, but declined to specify what she meant. (White House representatives did not immediately respond to a request for comment about the term's meaning).

On Friday, Florida's Sun Sentinel newspaper published footage of the 2015 speech showing Kelly was indeed wrong when he said Wilson bragged about securing footage for the FBI building.

Instead, Wilson spoke at length about how she worked to secure the naming of the building in honor of the slain agents.

She also credited a number of Republicans for working quickly, including then-House Speaker John Boehner and Florida Sen. Marco Rubio:

Consider this scenario, the brand new federal building that will house the FBI has been built. And the FBI approaches my office: “Congresswoman Wilson, the ribbon cutting has been scheduled in four short weeks. The dedication is on the government's calendar and cannot be changed. One problem, the FBI wants to name this gorgeous edifice at the same time in four weeks. Everyone said that's impossible. It takes at least eight months to a year to complete the process through the House, the Senate, and the president's office.”

He went into attack mode and in two days pulled it out of committee, brought it to the floor for a vote. Representative Curbelo and I presented it, we all voted, and I dashed it over to the senate, and put our senators on notice: “Put it on your radar!” Senator Nelson and Senator Rubio, who I believe have representatives here today, they hotlined it to the senate floor in just two days. And guess what, the president signed the bill into law this past Tuesday April 7th, 2015 with a bang, bang, bang!

Miami Republicans and then-FBI Director James Comey also praised Wilson for working to pass legislation on the naming of the building just three days before the ceremony, according to the Sun Sentinel.

“Rep. Wilson truly did the impossible, and we are eternally grateful,” Comey told the crowd at the same naming ceremony. 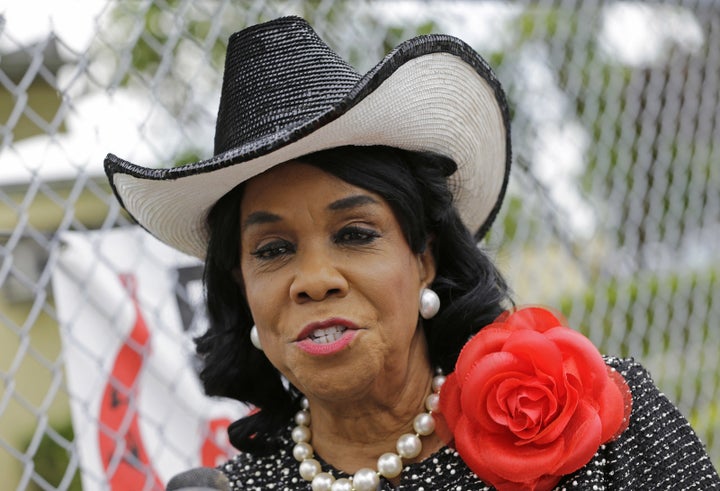 In response to the footage of the 2015 speech, the White House continued to stand by Kelly's criticism of Wilson on Friday.

Press secretary Sarah Huckabee Sanders told reporters that Kelly had said he was “stunned” that the congresswoman had “made comments at a building dedication honoring slain FBI agents about her own actions in Congress.” (In fact, Kelly mentioned money or funding specifically four times in his comments on Thursday).

“As Gen. Kelly pointed out, if you're able to make a sacred act like honoring American heroes about yourself, you're an empty barrel,” Sanders said.