A gunman entered the church in the town Sutherland Springs, east of San Antonio, Texas, and opened fire Sunday before being killed by authorities. 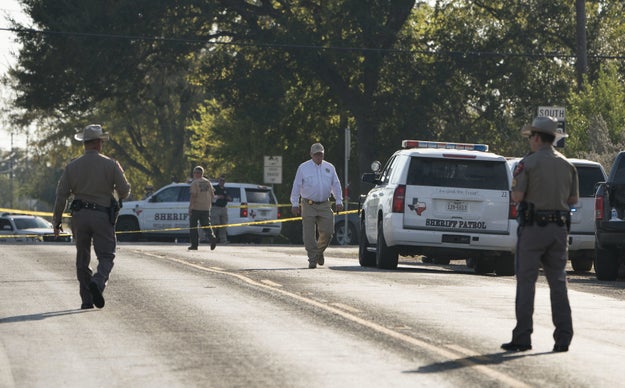 At least 26 are dead after a gunman opened fire during a Sunday service at the First Baptist Church in Sutherland Springs, Texas, making it the deadliest shooting in the state's history.

At 11:20 a.m., a man dressed in all black and tactical gear started firing at the small church, officials said at a press conference. He then crossed to the right side of the building, still firing, before going inside and killing 23 people and injuring dozens more. When he left the building, “a local resident grabbed his rifle and engaged that suspect,” said Freeman Martin, regional director of the Texas Department of Public Safety.

The gunman then dropped his weapon, an assault rifle, and ran to his car, Martin said. Authorities pursued the suspect, who they found dead inside his vehicle after it veered off the road.

Twenty-three people died inside the church, two people were killed outside, and one person died from their injuries after being transported from the scene, Martin said. The victims' ages range from 5 to 72-years-old.

“There's a lot of work to be done,” Martin said. “We are only hours into this investigation which is going to take significant amounts of time.”

Officials did not immediately release the suspect's name, saying only that he was a young, white male, maybe in his early 20's.

“There are many, many we cannot answer,” Martin said, explaining that authorities were still processing “many crime scenes.”

“We have the church, we have outside the church. We have where the suspect vehicle was located. We have following up on the suspect and where he's from, his residence,” the director said.

Officials cautioned that the death toll could rise.

“We ask for God's comfort, for God's guidance. And for God's healing, for all those who are suffering,” Gov. Gregg Abbott said at the press conference. I ask for every mom and dad at home tonight that you put your arm around your kid and give your kid a big hug and let them know how much you love them.”

Frank Pomeroy, the pastor of the church, believes his 14-year-old daughter is one of the victims. He told ABC News that “she was one very beautiful, special child.” Pomeroy and his wife, Sherri, were not at the church when the shooting occurred, according to CNN and NBC News.

The CEO of Connally Memorial Medical Center, a nearby hospital, told BuzzFeed News the hospital had received eight shooting victims on Sunday, four of whom were transferred out to University Hospital in San Antonio. The four who remained at Connally Memorial were in stable condition — three of them have been discharged, he said. A staff member at the University Hospital in San Antonio said he could not provide any information.

A spokesperson for the FBI's San Antonio field office, Michelle Lee, confirmed to BuzzFeed News that the agency is assisting local law enforcement in Sutherland Springs.

“We are responding to provide assistance and there have been reports of multiple injuries and fatalities. We don't have those numbers yet,” said Lee.