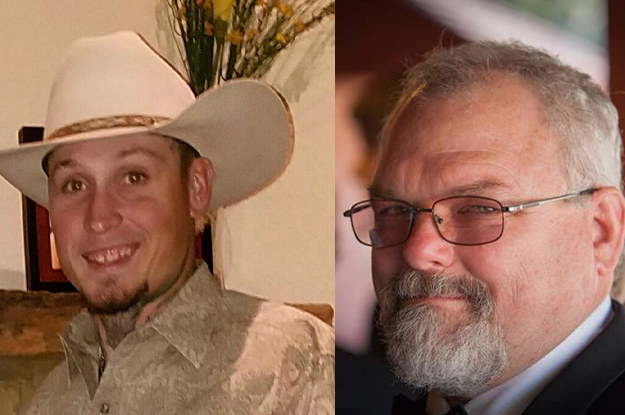 Johnnie Langendorff was driving on his usual route to his girlfriend's home on Sunday when he saw a masked man exchanging gunfire with a shoeless individual outside the First Baptist Church in Sutherland Springs, Texas.

Devin Kelley, the man accused of killing 26 people during church services, then got into his Ford Explorer, and began to flee the scene. That's when Stephen Willeford, a plumber who lived nearby the church, approached Langendorff's vehicle, barefooted, holding an AR-15 rifle.

“The gentleman with the rifle came across the street opened my door and said, 'He shot up the church and we got to chase him,'” Langendorff recounted during an interview on CNN Monday. “I said 'Let's go,' Langendorff said.

The two men, who had never met, chased Kelley for about 15 minutes at speeds nearing 100 mph, according to Langendorff, before the chase ended with Kelley crashing his vehicle in a ditch.

“I didn't know if anyone had a clue or not which direction he had gone,” Landendorff said. “I know that all the police were coming to the church to help, but, you know, I wanted to pursue him to make sure he got caught,” Landendorff added, recounting that the men has called the authorities and informed them of Kelley's location as they drove.

Alothough the two men had never met, Langendorff said he didn't hesitate to chase the Kelley's vehicle because, “That's what you do. You, you chase a bad guy.”

According to multiple reports, Willeford was woken from a map and told of the shooting by his daughter while at his home close to the church. His immediate reaction was to grab his rife and run out the door.

“They engaged in gunfire here at the church,” said Freeman Martin of the Texas Department of Public Safety at a press conference on Monday. “We know that suspect was shot. When he dropped his assault rifle, jumped in his Ford expedition and fled the scene, this good samaritan, our Texas hero, flagged down another young man and jumped in his vehicle and they pursued the suspect,” Martin said of Willeford and Langendorff.

Kelley's vehicle crashed into a ditch as Langendorff and Willeford closed in on his SUV. Langendorff said Willeford exited the vehicle, aimed his rifle at Kelley's car and told him to get out.

Kelley is believed to have died of a self-inflicted gunshot wound.

Langendorff said that he didn't get to talk with Willeford after the police arrived on scene, and hasn't seen him since. “Police showed up and after everything was taken care of after the man was confirmed dead,” Langendorff said. “They pretty much separated us.”

BuzzFeed News has reached out to Langendorff and Willeford for comment.