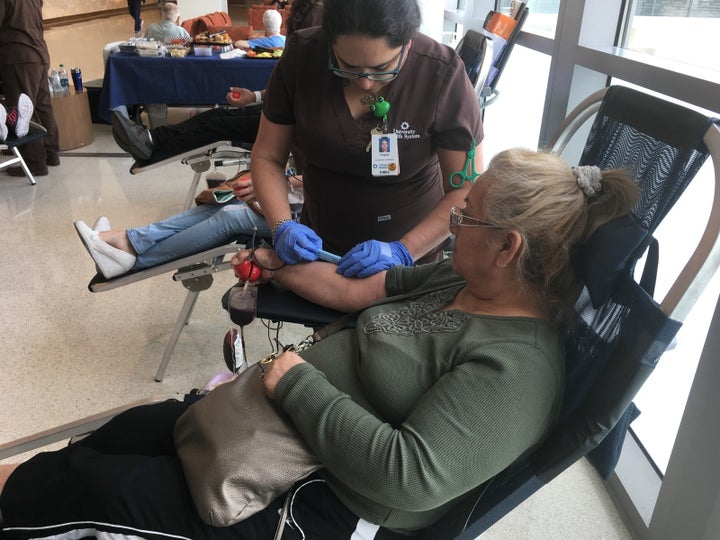 SAN ANTONIO, Texas — More than 100 units of blood went into the lifesaving care received by victims of the Sutherland Springs church shooting when they arrived at University Hospital.

By the next day, donors — including fellow church members, hospital employees, and people who came from around the state — had more than refilled the hospital’s blood reserves. On Monday, the hospital registered 167 donors who gave 154 units of blood. By midday Tuesday, 40 more donors had been registered with others steadily arriving.

Santa Reyna, 62, lives in San Antonio and said she was deeply saddened to hear about the shooting. When she saw the blood drive at the hospital, she said she knew she had to stop.

Seeing the more than 200 donors come to the hospital has been extraordinary — an example of the impact Whitehead said she and other healthcare workers hope to have in the community.

But the units collected have a shelf life of 42 days, she added. The hospital is hoping to encourage people to donate regularly, particularly through the busy winter months ahead. It’s not only to be ready for the next tragedy, but to meet the ongoing needs of people from new mothers to cancer patients.

“The need is always there, and we’ve always got patients who appreciate any support we can get from the community,” she said.

Indiana resident Marie Wimsett, who also gave blood on Tuesday, had been at the hospital since Thursday. Her 25-year-old daughter Kylie, who has the autoimmune disorder myasthenia gravis, had a medical emergency and remains in the neuro ICU.

Even amid her own family’s crisis, Wimsett said it was important for her to come to the blood drive: Her daughter has depended on plasma donations in the past.

On Sunday, Wimsett was with her daughter when the hospital alerted to code gray. Kylie’s service dog jumped from her side to the window to watch the helicopters bring in shooting victims.

“It was bone-chilling,” Wimsett said. “It’s like she knew something different was going on.”

Since then, she and her daughter have been thinking of the families of the victims. Chronic illness has made the Wimsetts unavoidably conscious that life can be cut short.

As the hospital pushed into high gear to respond to the shooting victims, the pharmacy backed up, Wimsett said. She watched her daughter crying from pain, but Kylie was thinking of the children and adults who had arrived from Sutherland Springs.

“They’re in way more pain than I am,” Kylie told her mother, Wimsett said. “I understand.”

LINK: “This Church Family Was My Everything”: Sutherland Springs Mourns Deadliest Shooting In Texas History