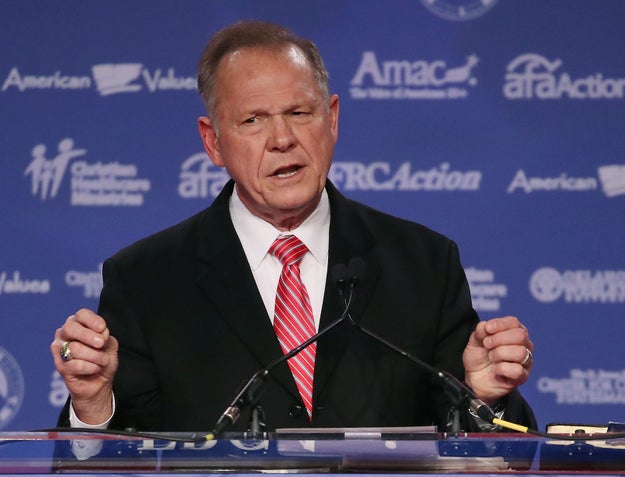 Judge Roy Moore denied again on Friday allegations that he'd initiated sexual conduct with a 14-year-old girl while he was in his 30s, but seemed to leave open the possibility that he'd pursued at least one other teen during that time.

Moore, a Republican candidate for Senate in Alabama, made his comments during Sean Hannity's radio show.

Leigh Corfman told the Washington Post that in 1979, when she was 14, Moore met her outside of a courtroom after offering to watch her while her mother went into a child custody hearing. Corfman told the paper that Moore, on a second trip to his home, “took off her shirt and pants and removed his clothes. He touched her over her bra and underpants, she says, and guided her hand to touch him over his underwear.”

“I don’t know Ms Corfman from anybody,” Moore said on Hannity's show. “I've never talked to, never known her or anything.” Moore called the story “completely manufactured.”

Moore also called the allegations “politically motivated after 40 years of public service,” and said he had “evidence of collusion” that would discredit the allegations but that he was not ready to go public with it. He issued a lengthy statement on Friday that didn't provide any evidence.

He is the Republican nominee for Attorney General Jeff Sessions’ former seat. The general election is on Dec. 12.

Hannity also asked Moore about Debbie Wesson Gibson, who, according to the Post, was 17 when Moore pursued her for two months and said “he kissed her once in his bedroom and once by the pool at a local country club.” She said “nothing bad happened” but that she realizes now the age difference made it inappropriate.

In response, Moore said, “I know her, but I don't remember going on dates with her. I knew her as a friend. If we did go on dates, then we did.”

Another woman, Gloria Thacker, told the Post she was 18 at the time when Moore initiated a relationship and have her wine at an age where it would have been illegal for her to drink. Moore said he did not remember whether he had gone on dates with them, but said he would not have dated people so young.

Moore said “I have never provided alcohol to minors.” To try to support his argument, he said the county they lived in was dry.

Moore said that anyone who abuses a 14-year-old girl “shouldn't be a Senate candidate, but I didn't do that.”

A poll by conducted by Opinion Savvy and commissioned by Decision Desk HQ show that the race between Moore and Democrat Doug Jones has evened out in response to the news. Both candidates' chances, according to the poll, are at 46%. More than half of those surveyed said they do not believe Moore should withdraw from the race because of it; 35% said he should.

Moore has long been a controversial political figure, especially for his stance on homosexuality, which he said should be illegal. The same day as the allegations of sexual misconduct broke, CNN reported that Moore was removed from presiding over a divorce case in the 1990s after barring a lesbian mother from seeing her children because of the mother's “present lifestyle.”