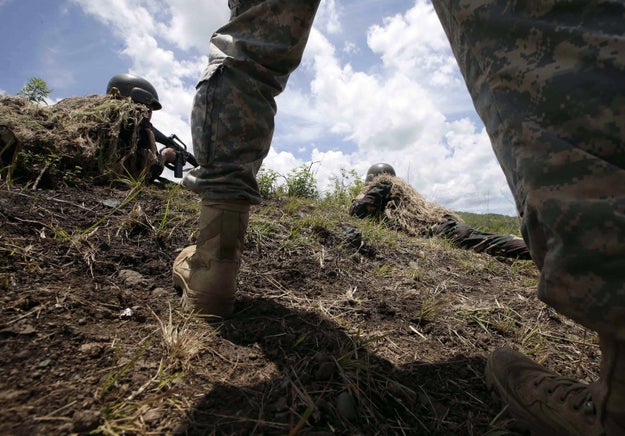 A US Army officer watches during military exercise with the Philippines.

An active-duty military member had sex-reassignment surgery on Tuesday, becoming the first to do so under a waiver program that allows the Pentagon to pay for it.

The transgender woman got her Combat Infantry Badge in Operation Anaconda in Afghanistan in 2003, according to NBC News, who first reported the news.

“This afternoon, an active-duty military member received a sex-reassignment surgery. Military hospitals do not have the surgical expertise to perform this type of surgery, therefore it was conducted in a private hospital,” Pentagon spokeswoman Dana W. White said in a statement to BuzzFeed News Tuesday.

Because the service member, who was not identified, had already started a sex-reassignment course of treatment, and the treating doctor deemed the surgery medically necessary, a waiver was approved by the director of the Defense Health Agency, White added.

The Supplemental Health Care Program, which facilitates health care to active-duty military members from the private sector, will cover the cost of the procedure.

In July, President Trump tweeted that transgender people cannot “serve in any capacity in the U.S. Military,” and the next month, signed a memo banning new transgender recruits and halting funding on sex-reassignment surgery.

Two lawsuits challenged the president's decision, saying it violated constitutional rights to equal protection and due process. A federal judge blocked parts of it just last month. (The policy was set to take effect fully in March 2018.)

The judge's order did not block the policy concerning sex reassignment surgeries, but Defense Secretary James Mattis still requires the military to provide transgender troops with those medical services.

In 2016, the Obama administration conducted studies that found transgender troops would not burden the military and established rules to let them serve openly.