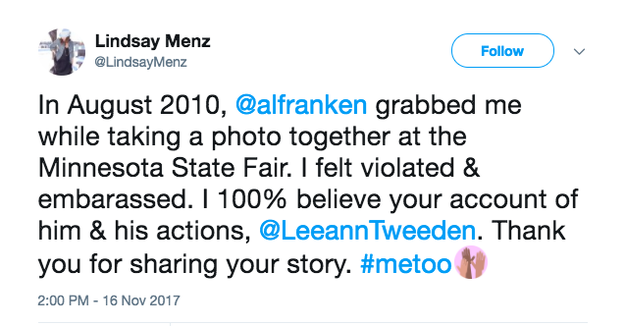 A woman has alleged that Sen. Al Franken “grabbed” her while taking a photo at the Minnesota State Fair in 2010.

Lindsay Menz, 33, tweeted the allegation against Franken on Thursday, hours after Leeann Tweeden, a morning news anchor in Los Angeles, accused the Minnesota Democratic senator of kissing and groping her without her consent in 2006, while he was a comedian.

Menz said that in August 2010 — two years after Franken was elected to the Senate — he “grabbed me while taking a photo together at the Minnesota State Fair.”

“I felt violated and embarrassed,” Menz said in her tweet. “I 100% believe your account of him and his actions, @LeeannTweeden.”

Menz then described the alleged incident in detail to CNN.

Menz, who is originally from Minnesota and now lives with her husband and three children in Texas, told CNN that she took photos with various elected officials and political candidates when they stopped by a local radio booth at the fair that was sponsored by her father's business.

When Franken stopped by at the booth, Menz said that she and her husband, Jermey Menz, recognized him and added that she had a cordial exchange with the senator.

When her husband was about to take a photo of Menz with Franken, she said that the senator “pulled me in really close, like awkward close, and as my husband took the picture, he put his hand full-fledged on my rear. It was wrapped tightly around my butt cheek.”

Menz said that Franken's hand wasn't around her waist or hip or side.

“It was definitely on my butt,” she said, adding that she walked away from Franken without another word after her husband took the photo. She later told Jeremy Menz that Franken “totally grabbed my butt.”

BuzzFeed News has reached out to Menz for comment.

In a statement to CNN, Franken said he did not remember the taking the photo with Menz, but felt “badly” that she felt disrespected.

“I take thousands of photos at the state fair surrounded by hundreds of people, and I certainly don't remember taking this picture,” Franken said. “I feel badly that Ms. Menz came away from our interaction feeling disrespected.”

Franken's office did not respond to BuzzFeed News' request for comment.

Menz said that she immediately described the incident to her husband and her parents. She told CNN that she uploaded the photo with Franken in a private Facebook post at the time of the incident. In response to her sister's comment about the photo, Menz wrote, “Dude — Al Franken TOTALLY molested me! Creeper!”

Menz said that while she and her husband have supported both Republican and Democratic candidates, they voted for Donald Trump last year. The White House has dismissed comparisons between Trump — who has been accused of sexual misconduct by more than a dozen women — and Franken, because “Franken admitted wrongdoing and the president hasn't.”

Franken has said he would “gladly cooperate” with an ethics investigation that Senate Majority Leader Mitch McConnell has called for after Tweeden's account was published. Franken has also apologized and said he understands “why we need to listen to and believe women’s experiences.”

LINK: Sen. Al Franken Says He’ll Cooperate With Investigation Into Allegations He Groped A Woman Without Her Consent

LINK: The White House Says The Difference Between Franken And Trump Allegations Is “Franken Admitted Wrongdoing And The President Hasn’t”