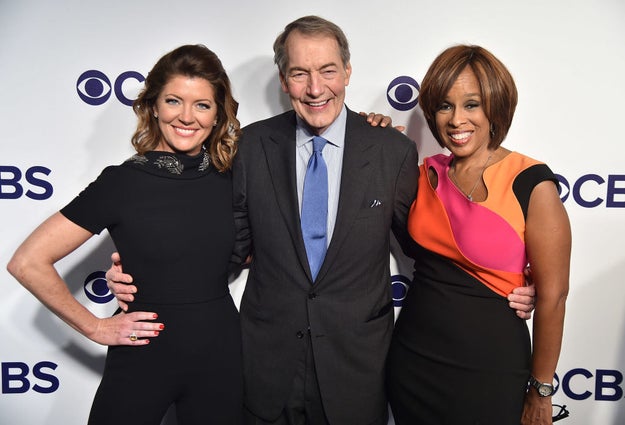 Veteran broadcaster Charlie Rose was suspended by CBS and Bloomberg LP on Monday after a Washington Post report detailing allegations by eight woman that he sexually harassed them over the years.

Rose, 75, apologized for the behavior reported in the Post investigation, which included allegations of groping, unwanted sexual advances, and in some cases, appearing nude in the same room as a colleague.

“It is essential that these women know I hear them and that I deeply apologize for my inappropriate behavior. I am greatly embarrassed,” he said in a statement. “I have behaved insensitively at times, and I accept responsibility for that, though I do not believe that all of these allegations are accurate. I always felt that I was pursuing shared feelings, even though I now realize I was mistaken.”

It was not clear how long Rose's suspension would last, with CBS saying only that it was looking into the matter.

CBS This Morning, which Rose hosts with Norah O'Donnell and Gayle King, is a perennial third behind NBC's Today and ABC's Good Morning America, which run neck and neck for No. 1. But CBS This Morning — with this trio of hosts since 2012 — has pulled much closer to its rivals than any previous incarnation of a CBS morning show. Rose's absence will surely hurt that momentum.

He has also been a 60 Minutes correspondent since 2008, recently interviewing Steve Bannon for the news magazine. His self-titled show since, which he has helmed since 1993, will also be temporarily suspended for an unspecified period.

“We are deeply disturbed to learn of these allegations and are immediately suspending the show from airing on Bloomberg TV,” the company said in a statement obtained by the New York Times.

The Washington Post reported that the accusations date back to the 1990s and happened as recently as 2011, the women ranging in age from 21 to 37 at the time. Three of the eight women in the story went on the record with the Post, which laid out a pattern of Rose using his stature to allegedly pursue his targets.

“He was a sexual predator, and I was his victim,” Reah Bravo, an intern for Rose's show starting in 2007, told the Post.

Kyle Godfrey-Ryan, an assistant to Rose in the mid-2000s, told the Post he walked in front of her naked more than a dozen times. She was 21 at the time.

Ryan said Rose also called her at odd hours late at night or early in the morning to repeat a fantasy he had about her swimming nude in a pool as he watched.

After the Post article was published, a ninth woman, reporter Lizzie O'Leary, tweeted that an article she wrote on Nov. 3 in New York Magazine's The Cut about her own experiences with sexual harassment and unwanted advances had included a line about Rose, although he was not identified at the time.

“The legendary TV anchor who looks you up and down like you’re a meal, when you are there to talk about congressional budgets?” O'Leary wrote.

O'Leary wrote that this and other individual instances described might not “quite constituted harassment,” but that the sum total of her experiences were now making her question trying to ignore them.

Rose is just the latest man in power, particularly in the media, to face allegations of sexual misconduct after the New York Times and the New Yorker published reports detailing allegations against Hollywood mogul Harvey Weinstein.

— Kate Aurthur contributed to this report.