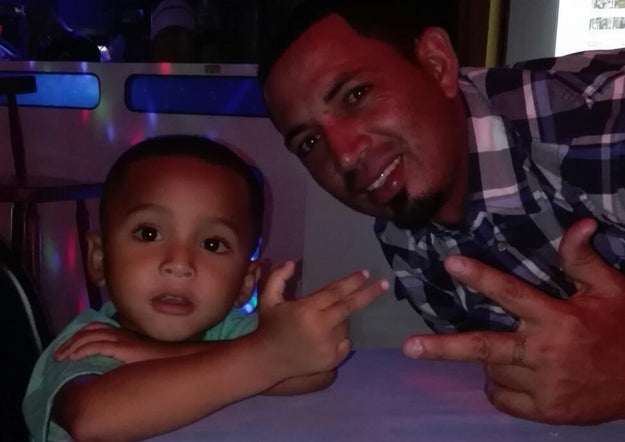 Another migrant father who crossed into the United States seeking asylum is accusing immigration agents of threatening him in order to separate him from his three-year-old son.

Eric Matute Castro, 33, is the second father to make such an allegation to BuzzFeed News. The accusations, immigrant advocates say, reinforces what they believe is an effort by Immigration and Customs Enforcement and Border Patrol to discourage Central American immigration by separating parents from their kids.

Castro, who is now being held at the Otay Detention Facility in San Diego, said that on Nov. 16 officials repeatedly told him and three other fathers they had to separate from their kids — and in the end, threatened them with violence if they didn't do so. They had all traveled to the border to seek asylum as part of a caravan.

“One of them said ‘If you want violence, you’ll have violence,'” Castro told BuzzFeed News. “I came to this country fleeing violence, if I wanted violence I would’ve stayed there.”

Ultimately, Castro said, one of the immigration agents grabbed him and another grabbed his son, Rojer Matute Ramirez. He considered holding on and pulling Rojer, but knew that would just end up hurting his son.

“I was sobbing, I’ve never felt anything like that moment when they separated me from my son,” Castro said. “I would’ve done anything they asked to let me stay with my son. If I had a gun and they asked me to shoot myself I would’ve done it.”

ICE did not respond to repeated requests for comment on Castro’s case. In the case of Jose Demar Fuentes, 30, another father who was with Castro, ICE said it separated him from his son because he didn’t have documents to prove he was the father.

However Al Otro Lado, a pro bono immigration legal services group, said Fuentes crossed the border with his Salvadoran photo ID and his son’s original birth certificate in hand. Castro said he too had his identification, son’s birth certificate, and vaccination records.

“They didn’t even ask for the documents, they didn’t give us a reason for separating us,” Castro said. “It was inhuman.”

The name of one of the other fathers was identified as Carlos Batres Aguilar.

BuzzFeed News reported previously that the number Central American fathers crossing the border with their children has seen a rapid increase in the last seven months. Immigrant advocacy groups say that because there isn't enough space in family shelters to house all the father-led families, ICE has been forced to release hundreds each week under a US court decision that says children must be held in the least restrictive environment.

In March, Reuters reported that the Department of Homeland Security was considering separating women and children who crossed the border as a way to deter families from coming to the US.

Alex Mensing, a member of Pueblos Sin Fronteras (“People Without Borders” in English), a group that helps Central Americans reach the US border, said separating the fathers was a deterrent technique from ICE and has also happened to women in the past.

“It’s a trend, this is not just an isolated incident and in fact it was mentioned early on by the administration as an option for DHS,” Mensing told BuzzFeed News. “The goal for immigration officers is for the parents to experience trauma and talk to other people they know in Central America, for the rumor to spread that they’ll take away your kids.”

Adults in immigration custody can wait up to six months to get a bond hearing. However, a long-standing 1997 court settlement mandates that kids should be placed in the least restrictive setting possible while their claims are processed, which means most but not all children are released.

In 2015, a federal judge ordered that mothers and children held in immigration centers be released from detention in order to comply with the settlement. 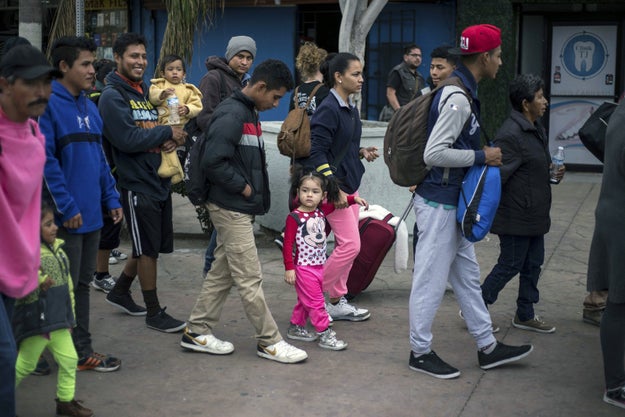 Jose Demar Fuentes, holding his son Mateo in yellow, walks with other Central American migrants seeking for asylum in the United States on November 12, 2017, in Tijuana.

Castro’s wife, Cynthia Vanessa Ramirez, said her husband fled because a group of men entered their home in Honduras and told them if they didn’t leave they would kill the entire family.

The 24-year-old said she stayed behind with her daughter because they didn’t have enough money for everyone to make the journey north. Ramirez is currently staying with family.

“I haven’t been able to get any information on my son, that’s been the hardest thing as a mother,” Ramirez told BuzzFeed News. “All I want is for them to be reunited, they’re very close, they’ve never been apart.”

Castro said that because his job was not as stable as his wife’s he practically raised Rojer himself.

“All I needed was to give birth to him,” Castro said. “I saw them take our kids the way a thief takes a wallet. If they had any humanity in them I didn’t see it.”

LINK: Immigrant Father Says Immigration Agents Took His Infant Son And Won’t Tell Him Where He Is