Police say they were onto Howell Donaldson after he asked a McDonald’s coworker to hold a bag containing a handgun connected to four killings. 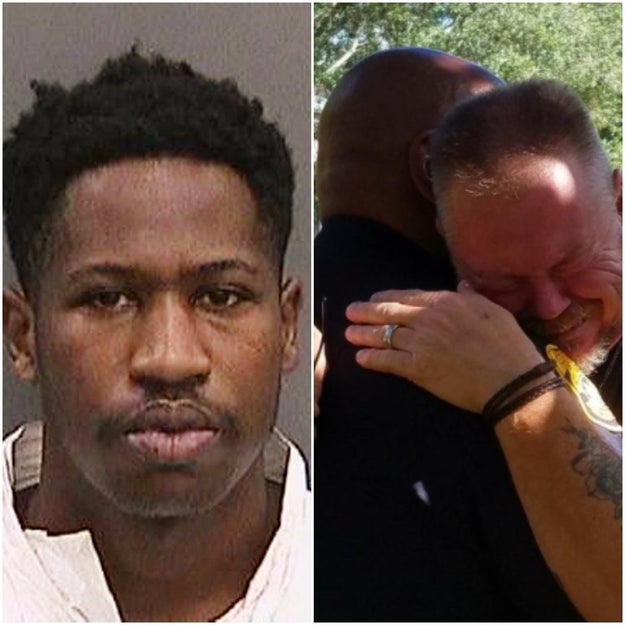 At left, booking photo for Howell Emanuel Donaldson. At right, the father of a shooting victim is embraced by the mayor.

Residents in Tampa under siege by a serial killer who appeared to attack at random are resting easier Wednesday after he was arrested and charged with four counts of murder.

Howell Donaldson, 24, is suspected of killing four people in the city's Seminole Heights neighborhood, according to Tampa police.. He was arrested Tuesday at the McDonald's where he worked and apparently gave himself away by asking a coworker to hold a bag containing a gun.

As Donaldson left work to get a payday loan, the employee notified a police officer doing paperwork in the seating area of the restaurant, the Tampa Bay Times reported.

The gun inside the bag was reported to be a loaded .40-caliber gun pistol.

Police later linked cartridges found at the crime scenes to Donaldson's weapon, according to an affidavit, and Donaldson allegedly admitted to owning the gun and the type of ammunition used in the killings, though he denied responsibility.

Police said a search of Donaldson's car revealed blood-stained clothing that matched surveillance footage from near where the shootings took place. And his phone's location data in October revealed that he had been in the Seminole Heights neighborhood “within minutes of the murders,” officials added.

The killings left the neighborhood on edge as police warned people not to walk alone, even with more officers being deployed to the area.

Most of the victims were shot in October and November while getting off a city bus or returning home from work. They included Benjamin Mitchell, 22; Monica Hoffa, 32; Anthony Naiboa, 20; and Ronald Felton, 60.

Investigators say it's still not clear why the Seminole Heights neighborhood was targeted. In January, Donaldson graduated from St. John's University in New York, where the school spokesman told the Associated Press he was a walk-on for the men's basketball team during the 2011-12 season.

Donaldson could face the death penalty.

As investigators continued to work the case, city officials and loved ones of the victims reacted with gratitude and relief Wednesday after the charges were announced.

“I can't thank the person who called us about the gun in the bag enough for standing up and doing the right thing,” said Tampa Police Chief Brian Dugan at the news conference.

Robert Hoffa, the uncle of Monica Hoffa, said the families would not left the victims be forgotten.

“Benjamin, Monica, Anthony and Ronald — we will not let their names die in vain,” he said.

On Tuesday after the arrest, Tampa Mayor Bob Buckthorn said that the city had been engaged in a struggle between good and evil.

“Well tonight, goodness has won,” he told reporters. “Tonight, in the battle between darkness and light, light has won.”