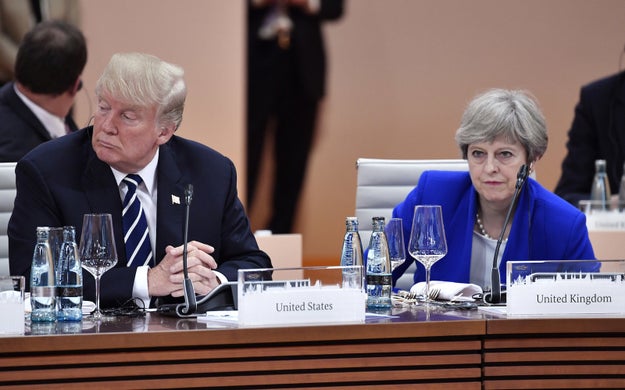 President Trump, left, and Britain's Prime Minister Theresa May at a G-20 meeting in July, 2017.

President Trump on Wednesday fired back at British prime minister Theresa May's criticism of him retweeting anti-Muslims videos, telling her on Twitter to instead focus on her own domestic issues.

“Don’t focus on me, focus on the destructive Radical Islamic Terrorism that is taking place within the United Kingdom. We are doing just fine!” he tweeted.

However, his tweet to the leader of a historic ally only came minutes after his original message misfired when he addressed it to the wrong Theresa May, mistakenly directing it to a Twitter handle belonging to one “Theresa Scrivener” with six followers. 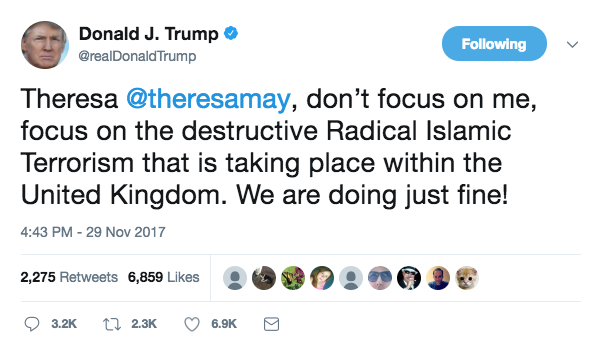 Trump's retort to May only adds to tensions between historical allies who have repeatedly referred to their “special relationship.” The latest spat between the two world leaders was sparked after Trump retweeted three anti-Muslim videos posted by the deputy leader of the far-right British political party Britain First.

The White House defended Trump's actions by saying that he was drawing attention to a national security issue, but one of the videos that purports to show a Muslim migrant beating up Dutch boy on crutches was debunked.

Trump's tweets drew criticism from around the world, including May, whose spokesperson said it was “wrong for the president to have done this.”

“Britain First seeks to divide communities through their use of hateful narratives which peddle lies and stoke tensions,” the spokesperson said. “They cause anxiety to law-abiding people. British people overwhelmingly reject the prejudiced rhetoric of the far right, which is the antithesis of the values which this country represents: decency, tolerance and respect.”

His reference to “Radical Islamic Terrorism” taking hold in the UK is also a common refrain that British officials and experts say is not rooted in numbers.

However, official British statisticians have said the rise was due to both an increase in crime and improved logging of incidents by police.